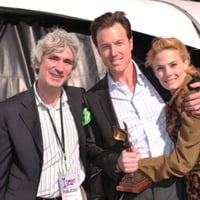 Marisa Zanuck net worth: Marisa Zanuck, one of the newest additions to the next season of the Bravo reality TV series The Real Housewives of Beverly Hills and wife to Hollywood producer Dean Zanuck, has a net worth of $5 million. Marisa Zanuck's net worth doesn't just come from reality TV shows and Hollywood cheese, though – contrary to her new title as a Beverly Hills "housewife," Zanuck works as a real estate agent with the ritzy real estate firm Hilton & Hyland. In what may or may not be a coincidence, Zanuck's boss at that job (and the Hilton whose name is on the door) is Rick Hilton. Reality TV devotees know that Rick Hilton is the husband of Kathy Hilton, who is the half-sister of cast members of The Real Housewives of Beverly Hills Kim and Kyle Richards. It's not known what role the connection played in getting Marisa her new reality TV job, but it's safe to assume that it probably didn't hurt. After all, if the characters on a reality show like The Real Housewives of Beverly Hills know each other before the cameras even start rolling, there's a better chance that their interactions on the show will be entertaining and maybe a little dramatic.