I.M. Pei was a Chinese-American architect who had a net worth of $150 million dollars at the time of his death in 2019. He is considered one of the best architects of the 20th century, having designed some of the most famous buildings in the world. I. M. Pei died on May 15, 2019 at the age of 102.

He was born Ieoh Ming Pei in Guangzhou, China on April 26, 1917, the son of one of China's most important bankers. The family moved to Hong Kong when he was an infant so his father could take the top position at the Hong Kong branch of the Bank of China. The family moved to Shanghai when Pei was 9 when his father was put in charge of the largest branch of the Bank of China. He attended the Massachusetts Institute of Technology where he received a Bachelor's degree in Architecture, followed by Harvard University where he obtained his Master's degree in Architecture in 1946.

Pei is best known for his modern architecture in buildings like the John F. Kennedy Library in Boston, the National Gallery of Art East Building, the Louvre Pyramid in Paris, the Bank of China Tower in Hong Kong, the Rock & Roll Hall of Fame in Cleveland, and the Museum of Islamic Art in Doha. He was the head of I.M. Pei & Associates, I.M. Pei & Partners, Pei Cobb Freed & Partners, and Pei Partnership Architects. 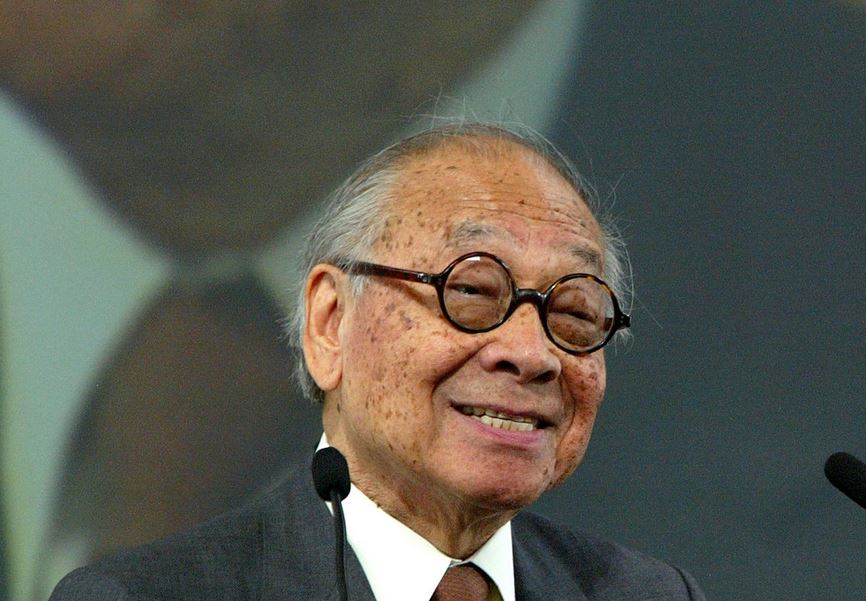 One of his only "failures" was the John Hancock Tower in Boston. As the building was nearing completion in 1973, sheets of glass suddenly started popping out of the facade. The issue was ultimately determined to be the fault of the glass company, not Pei's design but the controversy temporarily damaged his firm's reputation and finances. Years later he would admit that his company was nearly bankrupted by the lawsuits. The facade was fixed and the building ultimately won many awards.

During his life Pei received the Royal Gold Award, the AIA Gold Award, the Presidential Medal of Freedom, the Pritzker Prize, and the Praemium Imperiale. His family traces back to the Ming Dynasty. Pei's work is described as having cubist themes and is known for incorporating simple geometric patterns. He often contested the dichotomy of modern art versus post-modern art with the argument of how it affects community and the life revolving around us.

An avid art collector throughout his life, I.M. Pei managed to acquire pieces by Jean Dubuffet, Willem  de Koonig, Barnett Newman Franz Kline and many more. A year after his death, the entire collection was auctioned and fetched over $25 million. One painting alone, by Newman, sold for $10.5 million.

In the 1970s, Pei and his wife Eileen paid $215,000 for a townhouse in New York City. They proceeded to perform a massive renovation. Eileen Pei died in 2014. A few months following I.M.'s death, the four-bedroom townhouse was listed for sale for $8 million. In September 2021 the home sold for $8.6 million.

Below is a video tour of the property from the listing agents: