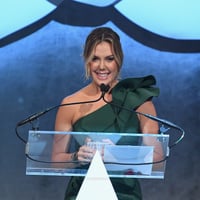 Kendra Scott net worth: Kendra Scott is an American businesswoman and fashion and accessories designer who has a net worth of $500 million. Kendra Scott was born in Kenosha, Wisconsin in March 1974. She serves as the chairman, lead designer, and CEO of Kendra Scott, LLC which she founded in 2002. Her designs were featured in Oscar de la Renta's Spring 2006 Runway show and her first retail store opened in Austin, Texas in 2010. Her brand now includes home accessories and fashion and fine jewelry and is valued at more than $1 billion. She has some 75 retail stores and an e-commerce business and her products are sold at Nordstrom, Bloomingdale's, Neiman Marcus, and more. She is also a philanthropist who gave away $3.5 million in 2016 and launched the Kendra Cares Program. Scott is a member of the Council of Fashion Designers of America. She married Matt Davis in 2014 and has three children.