What was Karl Lagerfeld's Net Worth?

Karl Lagerfeld was a German fashion designer and photographer who had a net worth of $300 million at the time of his death in February 2019. Lagerfeld began working in fashion professionally when he was 22 years old.

Unlike many of his peers, Karl never had a personal collection that became a huge success and was sold off for billions. He did however make a fortune designing for other people. Much of his career was defined by longstanding associations with Chanel and Fendi. He was creative director of Fendi from 1965 until his death and Chanel from 1983 until his death. Lagerfeld had lifetime contracts with both brands. The two contracts reportedly left him with a minimum of $50 million per year in income.

At the time of his death at age 85, Karl was considered the most prolific fashion designer of the 20th and 21st centuries. Late into life, he could regularly design more than a dozen collections per year. He launched his own fashion label, Karl Lagerfeld, in 1984, and he published several books of his photographs, including "Madonna Superstar: Photographs" (1991) and "Off the Record" (1994).

Karl Lagerfeld was born Karl Otto Lagerfeld on September 10, 1933, in Hamburg, Germany. His mother, Elisabeth, was working as a lingerie saleswoman when she met Karl's father, Otto, who owned a company dedicated to the production and importation of evaporated milk. Lagerfeld had an older sister, Martha, as well as an older half-sister, Theodora, from his father's previous marriage. Karl became interested in visual arts as a child, and former classmates have said that he was constantly making sketches in class.

Lagerfeld moved to Paris at age 14, and two years later, he entered an International Wool Secretariat design competition. He won the coat category and became friends with the winner of the dress category, Yves Saint Laurent. Karl was hired as a junior assistant to Pierre Balmain, and he later became Balmain's apprentice. After three years with Balmain, Lagerfeld took a job as the artistic director for Jean Patou. In 1964, he traveled to Rome to work for Tiziani and study art history, and he soon began designing freelance for brands such as Chloé and Valentino. In 1967, Fendi hired Karl to modernize the brand's fur line, and he worked with Fendi Rome for the rest of his life. Lagerfeld was hired by Chanel in the early '80s, a decade after Coco Chanel's death, and he revitalized the company and revamped Chanel's ready-to-wear line. In 1984, he launched the Karl Lagerfeld brand, which was meant to channel "intellectual sexiness." In 2002, Karl collaborated with Diesel founder Renzo Rosso on a denim collection for the Lagerfeld Gallery. The collection was called Lagerfeld Gallery by Diesel and included five limited edition pieces that were sold at Lagerfeld Galleries in Monaco and Paris and Diesel Denim Galleries in Tokyo and New York. In New York, over 90% of the jeans, which were priced from $240 to $1,840, sold out within the first week.

In late 2006, Karl announced a new line, K Karl Lagerfeld, featuring jeans and t-shirts for men and women, and in 2008, he designed a teddy bear in his likeness that was sold by Steiff for $1,500. In 2010, the Fashion Institute of Technology honored him with The Couture Council Fashion Visionary Award, and the following year, he collaborated with Orrefors on a crystal art collection. In 2013, political cartoons Lagerfeld drew were published in the newspaper "Frankfurter Allgemeine Zeitung," and he directed the short film "Once Upon a Time… in the Cité du Cinéma," which starred Keira Knightley as Coco Chanel. In 2018, he teamed up with Carpenters Workshop Gallery for "Architectures," a collection of functional sculptures. Lagerfeld's final Chanel collection featured après-ski clothing, and it was debuted at a fashion show a few weeks after his death. The show included chairs featuring images of Karl and Coco Chanel with the phrase "the beat goes on," and a moment of silence was held in his honor. 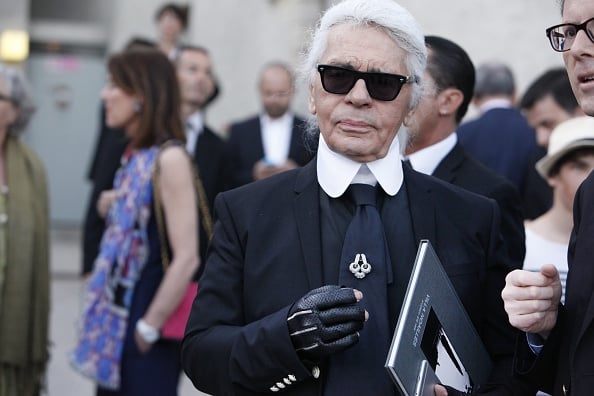 For 18 years, Karl was involved with French aristocrat/socialite/model Jacques de Bascher. Lagerfeld reportedly said of the relationship, "I infinitely loved that boy, but I had no physical contact with him. Of course, I was seduced by his physical charm." Jacques died of AIDS in the late '80s, and Karl stayed at his bedside in the hospital during the final stages of de Bascher's life. Lagerfeld owned a Birman cat, Choupette, who he received as a Christmas gift in 2011. Karl loved Choupette so dearly that he once told CNN, "There is no marriage, yet, for human beings and animals… I never thought that I would fall in love like this with a cat." In 2001, Lagerfeld revealed that he had lost 93 pounds over 13 months using a diet that Dr. Jean-Claude Houdret created specifically for him. The two later released a book called "The Karl Lagerfeld Diet." Karl collected books and had one of the world's largest personal libraries; at one point, he said that he owned 300,000 books.

Though Lagerfeld didn't wear fur, he was a supporter of using it in fashion, and he drew PETA's ire when he stated that hunters "make a living having learnt nothing else than hunting, killing those beasts who would kill us if they could"  and that "in a meat-eating world, wearing leather for shoes and clothes and even handbags, the discussion of fur is childish." A PETA spokesperson responded, "Karl Lagerfeld is a fashion dinosaur who is as out of step as his furs are out of style. The vast majority of fur these days comes not from hunters as he suggests, but from Chinese fur farms, where no law protects the millions of animals who are routinely beaten and skinned alive."

In January 2019, rumors about Lagerfeld's health swirled after he missed Chanel's Spring/Summer 2019 Haute Couture shows during Paris Haute Couture Fashion Week, and on February 18th, he was admitted to the American Hospital of Paris. The following morning, Karl passed away from complications of pancreatic cancer. Before his death, Lagerfeld said in an interview, "There will be no burial…I've asked to be cremated and for my ashes to dispersed with those of my mother…and those of Choupette, if she dies before me." As of this writing, Choupette is alive and well, and she was named as a beneficiary in Karl's will. On June 20, 2019, a celebration of Lagerfeld's life, "Karl For Ever," was held at the Grand Palais in Paris, and 2,500 people attended.

As for his estate, six beneficiaries besides Choupette were named in the will, but according to a "Daily Mail" article from June 2020, none of them had been granted access to the money yet. Lagerfeld put his accountant, Lucien Frydlender, in charge of his estate, but Frydlender reportedly closed his practice in September 2019 and refused to take phone calls from Karl's beneficiaries. Frydlender's wife said that her husband had been "very sick" and was unable to take care of the will. Lagerfeld's estate reportedly includes an "18th century nine-bedroom apartment on the Left Bank in Paris…brimming with beds once used by Marie-Antoinette" as well as homes in Vermont, and Biarritz, France, and a £25million Monaco apartment. In March 2021, it was announced that Sotheby's would be auctioning off several of Karl's possessions in Monaco.