What Is Jonathan Van Ness' Net Worth and Salary?

Jonathan Van Ness is an American hairdresser, television personality, podcaster, actor, writer, and producer who has a net worth of $8 million. Van Ness is best known for starring on the Netflix reality series "Queer Eye" (2018–present), and he has hosted the podcast "Getting Curious with Jonathan Van Ness" since 2015. In 2022, a TV series based on the podcast began streaming on Netflix.

Jonathan Van Ness was born Jonathan McDonald Van Ness on March 28, 1987, in Quincy, Illinois. He is the son of Jonathan Lyle Van Ness and Mary Winters and has said that he is from "a family of journalists." There weren't many openly gay youths in Quincy, and Jonathan was bullied for his "femininity and natural flamboyance." Van Ness said of that time in his life, "Growing up I definitely put on every nail polish, every heel, every scarf – I definitely had my mom's knockoff Hermès scarves in my hair and around my waist – those were my skirts, and I loved it. … But when I was really young, I had really femme-shamey, gender-shamey [reactions] when I would dress like that. When I would play with those things, I knew it needed to be … behind closed doors." During his youth, an older boy sexually abused Jonathan at church, and he has said that this led to self-destructive behavior, such as drug abuse and spending time in AOL chat rooms to meet older men for sex. Van Ness attended Quincy Senior High School, where he was the school's first male cheerleader. After graduation, he attended the University of Arizona on a cheerleading scholarship and majored in political science. After spending his monthly allowance on drugs, he started advertising sex for money, and he lost his scholarship due to his grades dropping. Jonathan left the University of Arizona after one semester and decided to pursue hairstyling, studying at the Aveda Institute in Minneapolis. 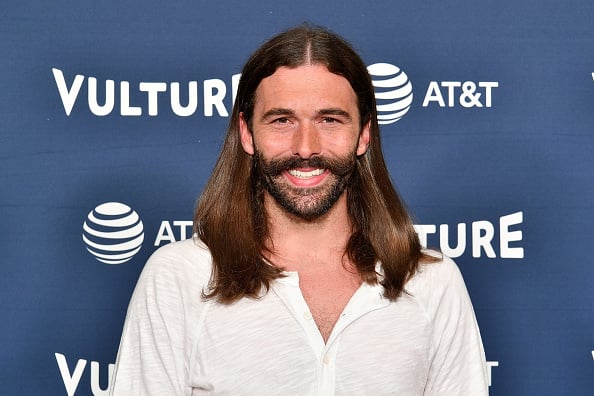 In 2012, Jonathan did a recap of a "Game of Thrones" episode while working on longtime customer Erin Gibson's hair. Gibson, who worked for Funny or Die, asked him to do that for the website, and it led to the "Gay of Thrones" web series, which ran for 54 episodes.

In 2018, he began starring as the grooming expert on "Queer Eye" alongside design expert Bobby Berk, culture and lifestyle expert Karamo Brown, fashion expert Tan France, and food and wine expert Antoni Porowski. In April 2022, it was announced that "Queer Eye" had been renewed for its seventh season. The show won the Primetime Emmy for Outstanding Structured Reality Program in 2018, 2019, 2020, and 2021.

In 2022, Van Ness starred in the series "Getting Curious with Jonathan Van Ness," in which he "meets with experts in various fields to uncover complexities in a wide range of subjects, from skyscrapers to bugs, or from gender identity to snacks."

In 2019, Jonathan told "Out" magazine, "The older I get, the more I think that I'm nonbinary — I'm gender nonconforming. Like, some days I feel like a man, but then other days I feel like a woman. I don't really — I think my energies are really all over the place. Any opportunity I have to break down stereotypes of the binary, I am down for it, I'm here for it. I think that a lot of times gender is used to separate and divide. It's this social construct that I don't really feel like I fit into the way I used to." Van Ness suffers from psoriasis and has said that after he had his first flare-up at age 23, he had to go to "like five doctors to figure out what it was." Jonathan is HIV-positive, and he was diagnosed at Planned Parenthood a day after he fainted at work. In April 2019, Van Ness and a few of his "Queer Eye" castmates met with Alexandria Ocasio-Cortez and Nancy Pelosi to discuss the Equality Act, and later that year, Jonathan endorsed Elizabeth Warren in the 2020 presidential race. In late 2020, Van Ness announced that he had married Mark Peacock, writing on Instagram, "I got married to my best friend & have a loving partner to continue building my life with."

In 2019, "Getting Curious with Jonathan Van Ness" won an iHeartRadio Podcast Award for Best LGBTQ Podcast, "Over the Top: A Raw Journey to Self-Love" received a Goodreads Choice Award for Memoir and Autobiography, and Van Ness was named Male Star of the Year at the Critics Choice Awards. He also earned iHeartRadio Podcast Award nominations for Best Overall Host – Male in 2020 and 2021. Jonathan has received four Primetime Emmy nominations: Outstanding Short Form Variety Series for "Gay of Thrones" in 2018 and 2019 and Outstanding Host for a Reality or Reality-Competition Program for "Queer Eye" in 2020 and 2021. The "Queer Eye" cast has earned five Gold Derby Award nominations, four for Reality Host (2018, 2019, 2020, and 2021) and one for Reality Host of the Decade (2019). They have also received Online Film & Television Association Award nominations for Best Individual Host or Panelist in a Reality or Non-Fiction Program (2018 and 2020) and Best Host or Individual Performance in A Variety, Nonfiction, or Reality Program (2021). Van Ness earned People's Choice Award nominations for Favorite Reality TV Star for "Queer Eye" in 2019 and 2020, and he received a Queery nomination for Badass in 2020. He has also earned two Shorty Award nominations, Storyteller of the Year in 2019 and Best Celebrity in 2020.

In 2020, Van Ness bought a home in Austin, Texas. He had been staying in an Airbnb while "Queer Eye" was filming there, but after the COVID-19 pandemic shut production down, he decided to find something more permanent. He told "Self" magazine, "I didn't expect to fall in love with Austin as much when we came here for shooting. And then we came, and everything shut down. I had my four cats and was on this lake at an Airbnb, and I was like, 'Do I love Austin? Is this a liberal bastion in Texas?' And it kind of is. I started exploring and was like, 'Oh, my God, I want to move here.' Then I found a house, and I loved it." A year or two before settling down in Austin, Jonathan purchased a two-story loft in Manhattan.