What is John Galliano's Net Worth and Salary?

John Galliano is a British-Gibraltarian fashion designer who has a net worth of $20 million. John Galliano has been the head of French companies Givenchy and Christian Dior in addition to his own label.

Galliano was born on November 28, 1960 in Gibraltar. His father, Juan Galliano, was from Gibraltar and worked as a plumber, while his mother, Anita Guillen, was from Spain. He grew up in Gibraltar with his two sisters before the family decided to move to England to pursue work. They lived in Streatham, Dulwich, and then in Brockley. The family were strict Roman Catholics.

Galliano attended St. Anthony's School and then Wilson's Grammar School in London. He then went on to study at Saint Martin's School of Art, where he graduated from in 1984 with a first class honours degree in Fashion Design. His first collection, called "Les Incroyables," was inspired by the French Revolution and received positive reviews and was bought for resale by a prominent fashion boutique called Browns.

Encouraged by his early success, Galliano decided to start his own fashion label alongside collaborators Amanda Harlech and Stephen Jones. However, he struggled financially as he was supported by various financial backers for short periods of time until he went bankrupt in 1990. He then decided to move to Paris in order to secure more steady financial backing and a stronger client base. He was able to secure help from Moroccan designer Faycal Amor, based in Paris, who invited him to set up a studio in his base in Paris. He was also able to put on his first show in 1989 as part of Paris Fashion Week.

In 1993, his agreement with Amor ended and he once again ended up in trouble. Without financial support, he missed the 1993 fashion season. He was introduced by Vogue editor, Anna Wintour, and Vanity Fair correspondent, Andre Leon Talley, to Portuguese socialite and fashion enthusiast Sao Schlumberger as well as some other financial backers of a venture firm, Arbela Inc. Gailliano was able to secure a new financial partnership. Because he was partnered with names that were highly regarded in Paris, the resulting collection received the high society stamp he had previously lacked and gave him a newfound sense of credibility in Paris. 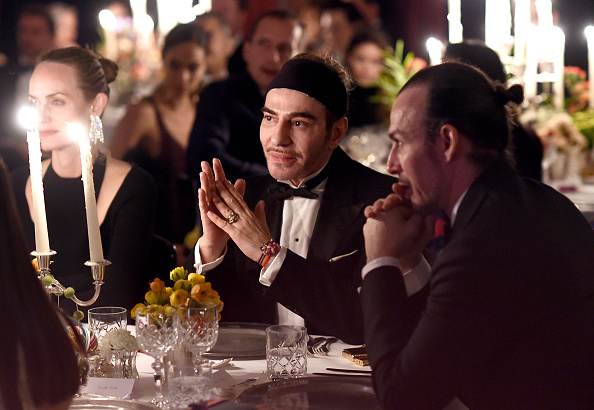 In July of 1995, Galliano became the designer of Givenchy by Bernard Arnault, who owned the luxury goods conglomerate LVMH. In January of 1996, Galliano presented his first couture show with Givenchy at the Stade de France. The collection was highly praised by the fashion media. Later that year, in October, LVMH made the decision to move Galliano to design for one of their other brands, Christian Dior, where he replaced designer Gianfranco Ferre.

While at Dior, Galliano received very high praise for his Haute Couture and ready-to-wear collections. He notably designed the chartreuse gown worn by Nicole Kidman at the 69th Academy Awards in 1997. He remained at Dior for over a decade and described his love of theatre and femininity as central the creation of his collections.

However, in 2011, his time with Dior came to an end with Dior announced they would be suspending him following his arrest after an allegedly anti-Semitic tirade in a Parisian bar. Videos of Galliano surfaced soon afterward that show him engaging in said anti-Semitic speech while in a drunken state. The arrest occurred just before the 2011 Paris Fashion Week.

Galliano has denied the allegations but faced trial in June of 2011, as it is illegal to express anti-Semitic ideas in France. He was found guilty of making these remarks and sentenced to pay 6,000 euros.

The controversy had an obvious effect on Galliano's career, considering the forced separation with Dior and the mixed opinions held by members of the fashion community regarding his actions. However, in 2013, he accepted an invitation from Oscar de la Renta to have a temporary spot in their design studio to allow him to prepare for his 2013 showing of his ready-to-wear collection at New York Fashion Week.

During his career, he has been named the British Designer of the Year four times, has been declared the Commander of the Order of the British Empire in 2001 for his services to the fashion industry, and was named to the French Legion of Honour in 2009, though this latter award was later rescinded by French president Francois Hollande following the anti-Semitic controversy.

Galliano had a relationship with British designer John Flett, who he has described as his "soulmate" and "the love of his life." However, Flett died at the age of 27 in 1991 from a heart attack while working in Florence.

Galliano later began a relationship with Alexis Roche, a style consultant. The two have a residence together in Paris and have been long-time partners. Galliano is a vegetarian for health reasons. 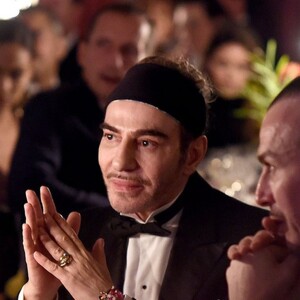