Jimmy Choo net worth: Jimmy Choo is a Malaysian shoe and fashion designer who has a net worth of $50 million dollars. Jimmy Choo lives in the United Kingdom, where his business is based, including Jimmy Choo Ltd, which is famous for its high-end women's shoes, which are also handmade. He was born into a family of shoe makers and was taught the trade at the age of 11, when he made his first shoe.

Additionally, his family's surname is actually Chow, but was spelled incorrectly on his birth certificate as Choo. After college, his designs began getting attention for his shoe designs in the mid and late 80s, when they were featured in various magazines, including Vogue, which used his models in an eight-page spread in 1988. He also began selling shoes to Diana, Princess of Wales, in 1990. Jimmy Choo Ltd was then founded, along with Tamara Mellon, a fashion magazine editor, in 1996. In 2001, he sold his half of the business and has since focused his attention on his couture fashion clothes. Today, Choo lives in London, but is working in Malaysia on creating a shoe making institute. Choo has two children, a son, Danny, and a daughter. 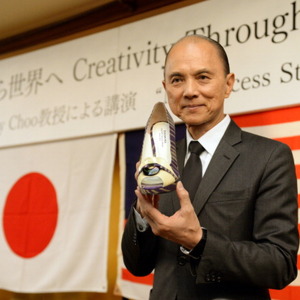