How much is Jeff Koons Worth?

Jeff Koons net worth: Jeff Koons is an American artist who has a net worth of $400 million. Jeff Koons was born in York, Pennsylvania in January 1955. He studied at the School of the Art Institute of Chicago and the Maryland Institute College of Art, Baltimore. He is known for working with pop culture subjects in addition to objects such as balloon animals which are produced in stainless steel and have mirror-finish surfaces. His works have sold for high amounts over the years and he set a world record auction price. Koon's Balloon Dog (Orange) sold for $58.4 million at Christie's to set the record for a living artist. Critics seem to be split on their views of his works with some viewing Koons as a pioneer while other dismissing his work as crass. He has received several awards including the U.S. State Department's Medal of Arts in 2013 and the Wollaston Award from the Royal Academy of Arts in 2008.

Most Expensive Living Artist: From 2013 to 2018 Jeff Koons was the most expensive living artist in the world thanks to the aforementioned $58.4 million sale of Balloon Dog (Orange). That record was broken in November 2018 when someone paid $90.3 million for a David Hockney painting called "Portrait of an Artist (Pool with Two Figures)". Koons regained the crown in May 2019 when his 1986 stainless steel rabbit was bought at auction for $91.1 million by a private client through art dealer/banker Robert R. Mnuchin, the father of Treasury Secretary Steven Mnuchin. The rabbit, which is one of three, was part of the estate sale of late magazine publisher S.I. Newhouse and remains the last example left in private hands. 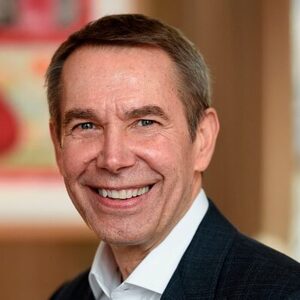