What was Jackson Pollock's Net Worth?

He is known for pioneering a unique style of drip painting, also known as the "drop technique." Pollock was considered a recluse and battled with alcoholism throughout his lifetime. He married artist Lee Krasner in 1945. His work has been displayed at a memorial retrospective exhibit at the Museum of Modern Art in New York. Pollock's work has also been honored at The Tate in London. Some of his major works include Male and Female, Stenographic Figure, The Moon Woman, Mural, The She-Wolf, Blue (Moby Dick), Troubled Queen, Eyes in the Heat, The Key, The Tea Cup Collection, Shimmering Substance, Portrait of H.M., Full Fathom Five, Cathedral, Enchanted Forest, Number 5, Mural on Indian red ground, Autumn Rhythm (Number 30), Blue Poles: No. 11, The Deep, and more.

Today Pollock's paintings are some of the most cherished and valuable on the planet. His paintings routinely sell for enormous sums of money. Some paintings sell in the $15-20 million range while others easily sell for $100+ million. In 2016, a billionaire paid $200 million for one of Pollack's paintings.

Upon his death in 1956, his wife Lee Krasner became the sole executor of his estate. Thirty years after Jackson's death, Lee Krasner died with an estate worth an inflation-adjusted $50 million thanks to the management and selective sale of his works.

Pollock was born on January 28, 1912 in Cody, Wyoming to parents Stella May and Leroy Pollock. He grew up with his four older brothers. His father was a farmer and then worked as a land surveyor for the government while his mother created handmade dresses. Pollock spent much of his childhood and adolescence growing up in Arizona and California, where he became interested in exploring Native American culture. He was interested in various Mexican muralists, like José Clemente Orozco.

Pollock was not a star student and was expelled from two different high schools. In 1930, at the age of 18, he followed his older brother to New York City where they both began studying under Thomas Hart Benton at the Arts Students League. He would spend a summer touring the Western United States with Benton as well as fellow art student, Glen Rounds.

In 1936, Pollock was first introduced to the use of liquid paint while at an experimental workshop in New York City organized by Mexican muralist, David Alfaro Siqueiros. He began using a paint pouring technique on some of his canvas works through the early 1940s. At the same time, he was working for the WPA Federal Art Project from 1938 until l942. In 1943, he was commissioned by Peggy Guggenheim to paint a large mural in the entry of her new townhouse. He did so on a large canvas, which was then hung at the entrance. The work of art received very positive reviews from art critics and helped further his reputation as a serious artist in the art world.

After a move out of the city in the early 1940s, Pollock began producing paintings in what would become his famous drip style. The paintings started attracting attention in the late 1940s and 1947 to 1950 is officially considered Pollock's "drip period." Following a four-page spread in "Life" magazine in 1949, Pollock became famous. From 1948 until 1951, the gallery owner Paul Facchetti was able to organize the first official exhibit of Pollock's works in his studio in Paris. 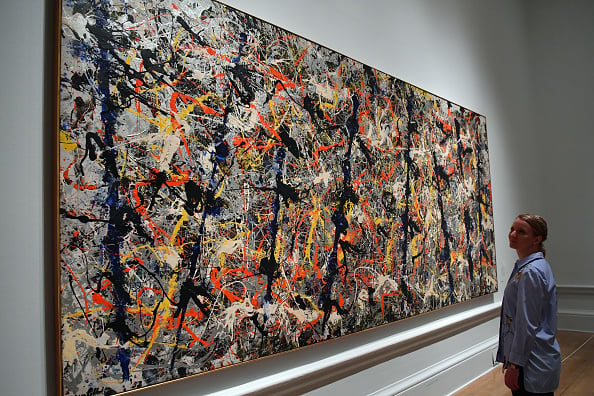 At the peak of his fame in 1950, Pollock suddenly abandoned working in his drip style. He work then became darker in color and often incorporated poured black paint, which would later be referred to as his "black pourings." The paintings did not attract nearly as much attention as his drip paintings and none of them sold during their exhibition at the Betty Parsons Gallery in New York. Critics have commented that this period of Pollock's work shows him trying to find balance between abstraction and depicting figures.

He then returned to incorporating more color into his work. Pollock had also moved to exhibiting his pieces in the Sidney Janis Gallery, which was considered to be a more commercial gallery. He struggled with having to keep up with the demand for his work and his struggle with alcohol continued to deepen. His career was then tragically cut short due to his untimely death in 1956.

In 1942, Pollock had an exhibit at the McMillen Gallery, where fellow artis Lee Krasner was also displaying art. Krasner was intrigued with Pollock's work and the two began a relationship shortly thereafter. In October of 1945, the couple were married in a church with two witnesses present. They then moved out of the city and bout a wood-frame house and barn on the south shore of Long Island. Pollock used the barn as a studio, where he would perfect his drip technique. Krasner's influence on her husband's work has been widely discussed, with many crediting her with helping bring Pollock into the modern era of contemporary art and technique, given her own extensive training.

Pollock struggled with alcoholism for much of his adult life. Some have also suggested he may have had bipolar disorder. He sought treatment from Jungian psychotherapists, Dr. Joseph Henderson and Dr. Violet Stab. The therapists often incorporated Pollock's art into their session.

In 1956, Pollock died in a car crash. At the time, Krasner was visiting friends and Europe as her and Pollock's relationship had begun to crumble. In fact, the only surviving passenger in the crash was Edith Metzger, Pollock's mistress. For the rest of her life, Krasner managed Pollock's estate and reputation. The couple are buried together in Green River Cemetery in New York.

Immediately following his death, the Museum of Modern Art in New York organized a memorial retrospective exhibit of his work. The MOMA has since held a number of similar exhibitions honoring Pollock over the years, as had The Tate museum in London.

His work has been the subject of much critical debate, with not all critics finding it as stunning as others. What is inarguable though is the influence that Pollock's work has had on other artists. Many artists have been particularly inspired by Pollock's approach to art, focusing on his emphasis on the process of creation. In 2004, one of Pollock's pieces, "One: Number 31, 1950," was ranked the eighth-most influential piece of modern art in a poll of over 500 artists and critics. Some of his paintings have also held records for the high prices they fetch at auctions and sales.

A number of books and films have also been based on Pollock's life and work, including the 2000 film, "Pollock," based on the Pulitzer Prize-winning biography, "Jackson Pollock: An American Saga."