Iris Apfel net worth: Iris Apfel is an American businesswoman, fashion icon, and interior designer who has a net worth of $25 million. Iris Apfel was born in Astoria, Queens, New York in August 1921. She studied at New York University and the University of Wisconsin. Apfel worked for Women's Wear Daily and married Carl Apfel in 1948.

The couple started the textile firm Old World Weavers. Iris Apfel was involved in many restoration projects from 1950 to 1992 including working at the White House for Presidents Truman, Kennedy, Eisenhower, Nixon, Johnson, Carter, Ford, Reagan, and Clinton. The Costume Institute at the Metropolitan Museum of Art had an exhibition on Apfel in 2005, and other museums have followed in their footsteps. Apfel served as a visiting professor at University of Texas at Austin in 2012 at 90 years old. She was named one of the fifty Best-Dressed over 50s by The Guardian in 2013. Apfel was featured in the 2015 documentary Iris. 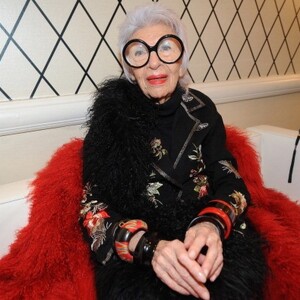