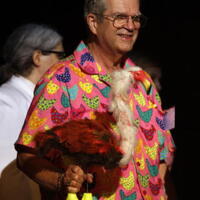 Don Featherstone net worth: Don Featherstone was an American artist who had a net worth of $5 million. Don Featherstone was born in Worcester, Massachusetts in January 1936 and passed away in June 2015. He was best known for being the creator of the Plastic Pink Flamingo. Featherstone created the flamingo while he worked for Union Products. He kept 57 plastic flamingos on his front lawn in Fitchburg, MA. He graduated from Worcester Art Museum's art school and started designing 3D animals for Union Products. The first pink flamingo went on sale in 1958. Featherstone was awarded the Ig Nobel Art Prize in 1996 and retired in 2000. His flamingo was based on photos of real flamingos in National Geographic as he was not able to use real flamingos as models. Don and his wife Nancy were known for dressing alike for more than 35 years. Don Featherstone passed away on June 22, 2015 at 79 years old from Lewy body disease which is a form of dementia.