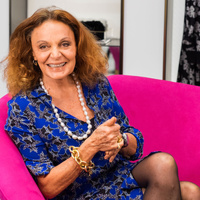 What is Diane von Furstenberg's Net Worth?

Diane von Furstenberg is an American fashion designer and philanthropist who has a net worth of $1.2 billion. Diane von Fürstenberg is a prominent Belgian fashion designer with a fashion company, DvF, that is available in over 70 countries. She is most well-known for the design of the wrap dress which is now on display at the Metropolitan Museum of Art. She has received numerous awards and accolades, including a spot on the Time 100 in 2015 by Time Magazine.

Diane Simone Michele Halfin was born on December 31, 1946 in Brussels, Belgium. Both her parents were Jewish, her father having moved to Belgium from the Republic of Moldova and her mother from Greece. Her mother had been a prisoner at Auschwitz concentration camp in Poland during the Holocaust and von Fürstenberg was born only 18 months after her mother's release.

Von Fürstenburg had an international upbringing, attending boarding school in Oxfordshire in England and later university in both Madrid and Geneva. It was during her early years in university that she met Prince Egon von Fürstenburg, whom she married at the age of 18 in 1969.

While she had been designing clothing throughout university, she first got involved in the fashion industry when she moved to Paris to work as assistant to a fashion photographer's agent but had a more hands-on experience upon moving to Italy. There she worked as an apprentice to Angelo Ferretti, a textile manufacturer. She began to develop an understanding of fabrics and cut and created her first dresses, a precursor to the ones she would later make her famous.

After her experience in Italy, von Fürstenburg moved to New York, where her career took off. In 1974, she revealed the knitted jersey wrap dress under her self-titled brand, which quickly became a massive success in women's fashion. She was soon after featured in Newsweek magazine, which described her as "the most marketable woman since Coco Chanel."

In the decades that followed, von Fürstenburg greatly expanded fashion line and ventured into other markets as well. After moving to Paris in 1985, she began a French-language publishing house called Salvy. She also began a cosmetic line, launched performs, has been featured on QVC, and started a fine jewelry collection. She also published three books describing her life, ascent in the fashion industry, and philosophy on women's beauty. Her clothes have been worn by a wide variety of celebrities and prominent social figures, including Gwyneth Paltrow, Jennifer Lopez, Madonna, Priyanka Chopra, and Michelle Obama.

Her work was the centerpiece of an exhibition curated by Andre Leon Talley entitled "Diane von Furstenberg: Journey of a Dress." The exhibition, which first was featured in Moscow Russia in 2009, received a substantial amount of media attention. The exhibition then traveled to Sao Paulo, Brazil in 2010 and to Beijing, China in 2011.

Von Furstenberg has more recently collaborated with GapKids in 2011, which involved the launch of her first collection of designs for children. She also designed the shirts for Hillary Clinton's presidential campaign in 2016. In 2019, Fürstenberg started a podcast, #InCharge, that is focused on empowering women. The podcast has featured a number of notable guests including Kris Jenner and Karlie Kloss. 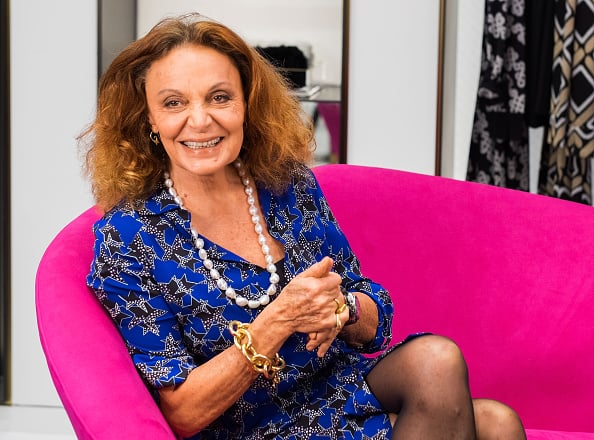 Von Fürstenburg's marriage to Prince Egon von Fürstenburg in 1969 was not enthusiastically supported by the groom's family, as they were Roman Catholic and she was Jewish. However, the auspicious marriage was considered to be somewhat dynastic, as Prince Egon's mother was heiress to the Fiat automotive fortune and a member of Itialian nobility and his father was a German Roman Catholic priest. As of result of this marriage, she earned the title of Her Serene Highness Princess Diane of Fürstenberg.

The couple had two children together, Alexander and Tatiana, before separating in 1972 and later divorcing in 1983. While she lost the official royal title, von Fürstenberg decided to continue using her first husband's last name.

Diane remarried in 2001 to Barry Diller, an American businessman who founded Fox Broadcasting Company and USA Broadcasting, among other media ventures.

Diane von Fürstenburg's designs and career has been positively recognized by numerous organizations, both within the fashion industry and elsewhere. In 2006, she was elected and remains the president of the Council of Fashion Designers of America. She received a start on Seventh Avenue's Fashion Walk of Fame in 2009 and was awarded a gold metal at the Queen Sofia Spanish Institute Gold Medal Gala in 2010.

She has also been heavily involved in women's leadership, working as a spokesperson for the Ban Bossy campaign, which is focused on creating leadership roles for young girls, and sitting on the board of Vital Voices, an organization that recognizes the work of women in leadership positions around the world.

Von Fürstenberg also works as the director of The Diller-von Fürestenburg Family Foundation, which she founded with her second husband. The organization works to provide support for nonprofits working in the arts, human rights, and education.

In February 2020, von Fürstenburg became a Chevalier de la Légion d'honneur, the highest French order of merit. She was presented the award by Christine Lagarde, president of the European Central Bank, for her work in the fashion industry, her philanthropic pursuits, and her advocacy for women's leadership.