David Garibaldi net worth: David Garibaldi is an American performance painter who has a net worth of $2 million. David Garibaldi was born in Los Angeles, California in 1982. He is best known for his stage act called "Rhythm and Hue" where he quickly creates paintings of famous rock musicians. In 2006 Garibaldi painted a portrait of Mick Jagger at the Rock & Roll Hall of Fame and Museum. He opened up for Blue Man Group on their tour of the United States and Canada in 2008. Garibaldi was a contestant on the 7th season of America's Got Talent in 2012 and finished in fourth place. His work is heavily influenced by artist Denny Dent. Other notable appearances for Garibaldi include opening up for Snoop Dogg, painting a portrait of Carlos Santana in 2007, painting a portrait of Jesus on The 700 Club in 2009, painting his first self-portrait at the 11th Annual Sacramento Film and Music Festival in 2010, and painting basketball player Jeremy Lin at halftime of a New York Knicks game in 2012. 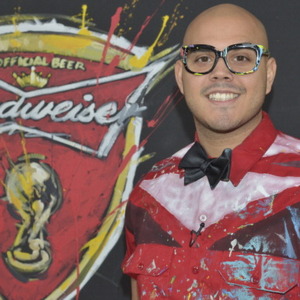