Daphne Guinness net worth: Daphne Guinness is an artist of both British and Irish nationality who has a net worth of $100 million. Daphne Guinness accumulated her net worth as a fashion icon, writer of fashion articles, as well as directing a couple of videos, and creating a new fragrance for Comme des Garcons.

Born Daphne Diana Joan Susanna Guinness on November 9, 1967, she is a direct heiress of Arthur Guinnes, the 18th-century inventor of the famous Irish stout beer that even today bears his name. Daphne Guinness, daughter of brewery heir father, Jonathan Guinness, and French artist mother, Suzanne Linsey, spent her childhood and teenage years in lavish homes in England and Ireland, as well as in an artists' colony in Spain, where Salvador Dali was a neighbor. Even though her love of style and art was ever-present, Daphne could not show to the world her creativity as at the age of nineteen she became the wife of Spyros Niarchos, son of a Greek shipping tycoon. During their marriage, which she calls a 'gilded cage' period, Daphne gave birth to three children, two sons, Nicolas and Alexis; and a daughter, Ines. It was with her divorce in 1999 when she turned into the designer, editor, model, muse, and stylist Daphne we know today. Ever since, she has became a true fashion icon who has worked with the best-known names in fashion, including Karl Lagerfeld, NARS, MAC, Akris, Gareth Pugh and Philip Treacy among others. From her platinum-and-black striped hair to her towering 10-inch heels, Daphne Guinness' unique style is acknowledged by big names like Tom Ford who once said: "She is one of the-if not the-most stylish women living. In addition to crating her persona, her to-die-for couture collection and amazing diamond jewelry, Daphne also directed a couple of videos, one of the most notable being Cashback, which was nominated at the Academy Awards in 2004.

That she was born to inspire proves her participation in numerous philanthropic efforts, charities and worthy causes, some of which are organized by her The Isabella Blow Foundation set up in 2007. 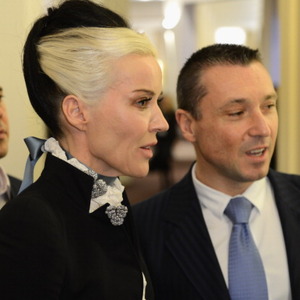