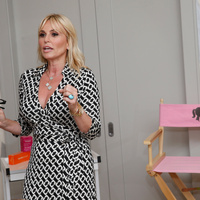 Cori Goldfarb net worth: Cori Goldfarb is a Long Island businesswoman, jewelry designer, and reality television personality who has a net worth of $8 million. Cori Goldfarb is best known for running her successful jewelry empire, Truth + Jewelry, and appearing on the Bravo reality series, Secrets and Wives, which premiered in 2015. The show follows the lives of six affluent, longtime girlfriends who live on Long Island as they navigate the pitfalls of marriage and divorce. Goldfarb's jewelry line, Truth + Jewelry, is an exclusive line of earrings, necklaces, bracelets and accessories to service a private clientele—and now has enhanced that elite collection for a broader audience. Each Truth + Jewelry piece reflects Cori's unique style sensibility, a blend of understated elegance and artful innovation. On the show, Secrets and Wives, Goldfarb is "friends with everyone in this tight-knit Long Island group." In addition to her jewelry, she also runs a high-end spa under the name Truth + Beauty, with her husband, and the business puts a significant strain on their marriage at times. Within her community, Cori's many philanthropic efforts have won her continued recognition and respect. She has devoted her time to several charitable organizations, including the UJA Federation, Heather on Earth, and the Crohn's and Colitis Foundation.