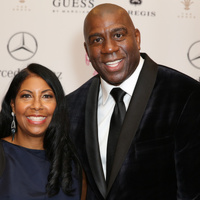 Cookie Johnson net worth: Cookie Johnson is an American HIV awareness advocate and businesswoman who has a net worth of $50 million. Cookie Johnson, also known as Earlitha Kelly Johnson, was born in Huntsville, Alabama, and went on to graduate from Michigan State University with a degree in Textiles and Retailing. She began working in retail, and eventually relocated to Los Angeles, California to work for a sportswear company. In Los Angeles, she met married NBA star Earvin "Magic" Johnson. He was subsequently diagnosed with HIV in 1991, when she was two months pregnant. The couple began to actively campaign and support HIV/AIDS awareness/prevention initiatives and research projects, and launched their own foundation, the Magic Johnson Foundation. In addition to raising their children, and continuing to advocate for further research and educational programs, she also designs a popular brand of jeans, carried at luxury department stores such as Neiman Marcus and Bloomingdales.