Chloe Bartoli net worth: Chloe Bartoli is an American stylist and socialite who has a net worth of $500 thousand. Chloe Bartoli currently works for Curve, a series of popular fashion boutiques started by celebrity stylist Nevena Borrisova. Chloe is known for her rock star style choices, and has influenced the direction of Curve's overall aesthetic.

She has dressed many celebrities, most recently Jared Leto, who rumor has it she is also dated. She regularly posts photos of her jet-setting life to Instagram, and many of her photos are featured on the increasingly popular blog, "Rich Kids of Instagram". The slightly tongue-in-cheek blog features photos posted by the children of wealthy business people and celebrities as they go about partying and traveling. Gilt frames surround all of the photos that primarily feature famous offspring, in various states of undress, frolicking in exotic locations. Chloe is largely featured hanging out with young supermodels like Bella Hadid, and is also known for dating Scott Disick. Before Disick started dating Kourtney Kardashian, he and Chloe were an item, and in 2015 after the public split between Kardashian and Disick, Chloe and Scott were seen together on vacation with friends in Monte Carlo. 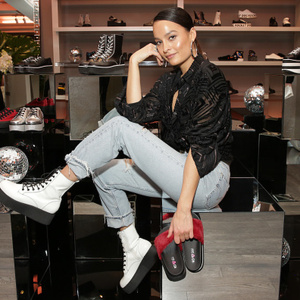