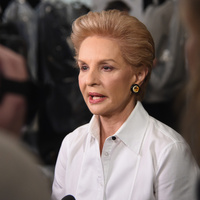 Carolina Herrera net worth and salary: Carolina Herrera is a Venezuelan-American fashion designer who has a net worth of $130 million. Carolina Herrera was born Maria Carolina Josefina Pacanins y Nino in Caracas, Venezuela in January 1939. Her grandmother introduced her to the world of fashion. She married Venezuelan land owner Guillermo Behrens Tello in 1957 when she was 18. She married Reinaldo Herrera Guevara in 1968, who served as The 5th Marques of Torre Casa. She had two daughters with him and two daughters from her first marriage. In 1972 Herrera first appeared on the International Best Dressed List. She started her own clothing line and had her first runway show in 1980. Some of her most notable clients have included Jacqueline Kennedy Onasis, Duchess Diana de Melo, actress Renee Zellweger, and Michelle Obama. Puig acquired her business in 1995 and she stayed on as Creative Director. Her lines are carried in 280 stores in more than 100 countries. She has received a Lifetime Achievement Award from the Council of Fashion Designers of America. Herrera received Spain's Gold Medal for Merit in the Fine Arts in 2002. She has also received the Fashion Group International Superstar Award and the Style Awards Designer of the Year. Carolina has appeared on the cover of Vogue magazine seven times.