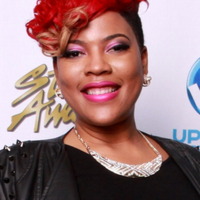 Brooklyn Tankard net worth: Brooklyn Tankard is an American television personality who has a net worth of $1 million. Brooklyn Tankard is best known for appearing on the hit Bravo series, Thicker Than Water with her larger than life family. She is the eldest daughter of the Tankard clan. Her parents are Jewel Tankard and Ben Tankard. and has worked to overcome a number of personal obstacles during a dark period of her life. She is known for her work with her celebrity hairline and her innovative hair and fashion events. She also wrote a book called The Detour to Destiny, which is set to release in 2015. In 2015, she also appeared on the hit Bravo reality series Millionaire Matchmaker with Patti Stanger, where Patti helped her work through the right steps toward finding a successful relationship. Brooklyn Tankard has one daughter named Diamond who is the apple of her mother's eye, and shares her mother's love of fashion, modeling and dance.