Betsey Johnson Net Worth: Betsey Johnson is an American fashion designer best known for her feminine and whimsical designs who has a net worth of $50 million dollars. Betsey Johnson was born on August 10, 1942 in Wethersfield, Connecticut. Following her graduation from high school, Johnson studied at the Pratt Institute and then later graduated Phi Beta Kappa from Syracuse University where she was a member of the Alpha Xi Delta women's sorority. After graduation, she spent a summer as an intern at Mademoiselle Magazine. Johnson's fashion career started after she entered and won the Mademoiselle Guest Editor Contest. Within a year, she was the in-house designer for Manhattan boutique Paraphernalia. Johnson became part of both the youthquake fashion movement and Andy Warhol's underground scene, along with The Velvet Underground, Edie Sedgwick, and Lou Reed. In 1969, she opened a boutique called Betsey Bunky Nini on New York's Upper East Side. Edie Sedgwick was her house model and Johnson designed the clothing Sedgwick wore on her last film, "Ciao! Manhattan".

In the 1970s, Johnson took control of the fashion label "Alley Cat" which was popular with the rock 'n roll musicians of the day. In her first year, her debut collection for Alley Cat reportedly sold $5 million in volume. In 1972 she won the Coty Award. In 1978, Johnson started her own fashion line. Her second collection did not sell well, leaving her with 3,000 pieces of spring clothing and insufficient funds to stage a 1981 fashion show to sell them and Johnson opened a retail store in the SoHo area of New York City. She designed the dress that Lisa Loeb wore in the music video for her 1994 hit Stay (I Missed You). In 2002, Johnson was inducted into the Fashion Walk of Fame, and in 2014 she appeared on the hit ABC television show, "Dancing With the Stars."

After struggling financially for several years and nearly going bankrupt, Betsey Johnson (the company) was acquired by Steve Madden (the company) in 2010 for $27.5 million. 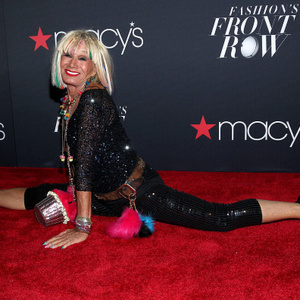