Anish Kapoor net worth: Anish Kapoor is an Indian sculptor who has a net worth of $700 million. He was born on March 12, 1954 in Mumbai, India to a Hindu father and a Jewish mother. Kapoor attended a prestigious all-boys boarding school in India called The Doon School in Dehradun, India. In 1973, he left for London, where he moved to study art, first at the Hornsey College of Art and later at the Chelsea School of Art and Design.

He remained in London and created a lucrative career in art. He represented the Britain in 1990 at the XLIV Venice Biennale, and was awarded the Premio Duemila Prize for his work. In 1991, he received the Turner Prize, and in 2002 received the Unilever Commission for the Turbine Hall at the Tate Modern in London. His notable public sculptures include "Cloud Gate" in Millennium Park in Chicago, "Sky Mirror" at the Rockefeller Center in New York, "Kensington Gardens" in London, "Temenos" in Middlesbrough, "Leviathan" at the Grand Palais in Paris, and "ArcelorMittal Orbit" which was commissioned as permanent artwork for London's Olympic Park in 2012. Kapoor received a Knighthood in the 2013 Birthday Honours for services to visual arts. He has collections displayed worldwide and 2008 appears to have been a particularly good year for the artist. He earned $27 million profit on his artwork, which took his fortune to an estimated $62.7 million, and his record auction price is £1.94 million, was also set in July 2008. He was married to Susanne Spicale, a striking German-born art historian and the couple has two children. Anish and Susanne separated after 18 years of marriage and in 2013, Anish Kapoor was seen dating Sophie Walker, a garden designer who was much younger than Kapoor. 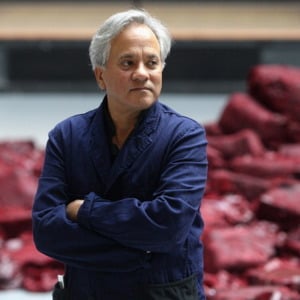