Alec Monopoly net worth: Alec Monopoly is the alias of an unidentified graffiti artist who has a net worth of $12 million. Originally from New York City, Alec Monopoly moved to Los Angeles in 2006 where he found working was easier due to the number of billboards located throughout the city . The artist has worked in the urban environments of New York, Miami, Los Angeles, Europe and throughout Asia using materials like stencils, spray paint, epoxies, varnishes and newspapers to subversively depict various iconic pop culture characters.

The artist's best known graffiti character is a character in a tuxedo and top-hat, coined the "Monopoly Man", an idea originally inspired by the stockbroker, Bernie Madoff. In 2010, he had his first solo gallery show in New York, and also took part in an exhibition at the Mondrian Hotel as part of Art Basel Miami Beach. In 2013, he hosted a yacht party at Art Basel Miami Beach (which was sponsored by Samsug), and during that same year, created a piece of work that was painted live on a piece of red carpet, to publicize Justin Bieber's concert documentary, Justin Bieber's Believe. In October 2014, Alec Monopoly made an impression when he appeared on the hit Bravo reality series, Million Dollar Listing: Los Angeles while wearing a bandana around his mouth during real estate discussions with Josh Altman. 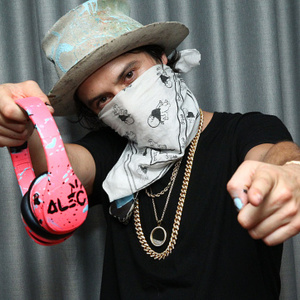