Albert Einstein net worth: Albert Einstein was a German-born theoretical physicist who had a net worth equal to $65 thousand at the time of his death in 1955. That's the same as around $634,000 in today's dollars after adjusting for inflation. He is one of the most influential scientists in history, known for developing both the theory of relativity and the equation E=MC2. In 1921, he won the Nobel Prize in Physics for innovations in the field of quantum physics.

Salaries/Estate Value/Royalties: Albert Einstein enjoyed a relatively modest net worth during his lifetime compared to his level of fame and importance to mankind. He was actually quite poor throughout his career. In death, he is perennially one of the highest-paid dead celebrities. Thanks largely to the licensing of his name and likeness, primary on the "Baby Einstein" product line, royalties for Einstein's beneficiary's earn millions per year. The royalties from Baby Einstein alone have been known top $10 – 20 million per year.

Unfortunately, Einstein's surviving blood relatives are NOT the beneficiaries these millions. When his granddaughter Evelyn Einstein died in 2011 at the age of 70, she was not a wealthy woman. In fact she was impoverished at various points in her life, reportedly living out of her car and eating discarded food scraps for a period.

At the time of his death in 1955, Albert's estate was worth $65,000. By this point, his second wife Elsa (who was his second cousin maternally and his FIRST cousin paternally) had been dead for nineteen years. According to the terms of his will, Albert's surviving children were bequeathed gifts ranging from $10,000 to $20,000. His grandson Bernhard was gifted a modest sum of money and a violin. And while that may not seem like much compared to tens of thousands of dollars, Einstein considered the violin to be his most-cherished worldly possession. His secretary of nearly 30-decades Helen Dukas was also the beneficiary of several thousands of dollars. Whatever was left after those gifts went to his stepdaughter Margot, Elsa's daughter from a previous marriage.

Cash wasn't Helen's only consideration in the Einstein will. Helen and Otto Nathan – a fellow professor at Princeton and one of Albert's closest friends – were given control over Einstein's literary estate, copyrights, publications rights and royalties. Though the financial benefits generated by those publications, copyrights and royalties actually go to The Hebrew University in Jerusalem, according to Einstein's will. That's where the millions of dollars in annual benefits go today.

Early Life: Albert Einstein was born on March 14, 1879, in Ulm, Germany. Einstein's parents were non-practicing Ashkenazi Jews. Einstein's father, Hermann Einstein, was a salesman and engineer. A year after Einstein's birth, Hermann moved the family to Munich, where he founded a company that produced electrical equipment. The business did not prove to be successful and the elder Einstein lost a fortune on his business before it fully collapsed.

In Munich, Einstein went to school at Luitpold Gymnasium, which he attended from ages eight to sixteen.

Einstein was a precocious child, taking to science and mathematics at an early age. At twelve, for instance, he discovered the Pythagorean theorem on his own. He also mastered calculus by the time he was fourteen. A tutor once said about the young Einstein, "…the flight of his mathematical genius was so high I could not follow." In addition to his mathematical interests, Einstein played violin. He adored music, especially the compositions of Mozart.

In 1895, when Einstein was sixteen, he moved to Switzerland, where he completed his secondary education. A year later, he began a teaching diploma program at the Swiss Federal Polytechnic School in Zurich. He graduated in 1900. Amazingly, out of nearly 2,000 graduating seniors, Albert was one of four who did NOT receive a job offer after school ended.

Albert's financial stress compounded when his then-girlfriend, soon-to-be-wife, Mileva, became pregnant. To earn an income, Albert offered his services as a math tutor to the children of local wealthy families. To drum up clients he had to go so far as to place an ad in the local newspaper. The ad offered the first lesson for free.

Rise to Success: In 1905, at age 26, Einstein earned a PhD from the University of Zurich. 1905 is known as Einstein's "Annus Mirabilis," or "Year of Miracles," because he published four major scientific papers that transformed science as we know it today.

Unfortunately the world was not yet ready to recognize or understand Albert's revelations. Meanwhile, from 1902-1909, Einstein worked at a patent office, evaluating patent applications. He landed the job through the parent of one of the kids he previously tutored. Einstein's salary while working at the patent office was 3,500 francs per year, the equivalent of $675 USD a year… equal to around $15,000 per year in today's dollars.

In his work at the patent office, Einstein evaluated key scientific questions that prompted him to make several breakthroughs later in his career.

By 1908, Einstein was already recognized as a leading figure in the scientific community. He became a professor at the University of Bern in Switzerland and then at Charles University in Prague in 1911. His renowned status allowed him to travel the world, giving lectures at esteemed universities. He went to places such as Palestine, Japan, China, Singapore, and the United states.

In 1929 Albert used his life savings to build his dream home in a lakeside town outside of Berlin called Caputh.

In 1933, during the rise of Nazi Germany and Adolf Hitler, Einstein decided to immigrate to the United States. As a person with Jewish heritage he knew it was unsafe to stay. He renounced his German citizenship and settled into a position at the Institute for Advanced Study in Princeton, New Jersey. The Nazis proceeded to confiscate all of the assets Einstein left behind, including his bank accounts and his beloved dream home on the lake.

Upon accepting the job at Princeton, Albert was initially offered a salary of $3,000 per year. That's the same as roughly $60,000 per year in today's dollars. Albert was quite happy with the arrangement, but Elsa thought Princeton could do better. She went back to Princeton and negotiated a salary of $16,000 per year for the rest of Albert's life. That's the same as around $321,000 per year. Thanks to this salary, some speaking engagement fees and some meager royalties on his copyrights, Albert had disposable income and even a bit of wealth for the first time in his life.

In 1940, he became a citizen of the United States, where he remained for nearly the rest of his life.

Personal Life: At 16, when he moved to Switzerland, Einstein fell in love with his host's daughter, Marie Winteler. A year later, their relationship ended when Einstein moved to Zurich. He met his first wife Mileva Marić while enrolled at the Swiss Federal Polytechnic School; she was the only female student in his mathematics and physics class. In 1902, they were married.

Einstein and Marić had a daughter, Lieserl. Her whereabouts post-1903 are unknown, but some theorize that she succumbed to scarlet fever as a baby. Einstein and Marić then had two sons, Hans and Albert, in 1904 and 1910, respectively.

During this time Einstein wrote letters to Marie Winteler, speaking of a "misguided love" for his wife. And by 1914 Einstein's romantic interest had shifted from his wife to his cousin, Elsa Löwenthal. In 1919 Einstein divorced Mileva. He married Elsa a few months alter. As part of the divorce settlement, Einstein promised to give Mileva the entirety of whatever funds came from a Noble Prize that he expected to receive at some point. Sure enough, in 1921 he won the Nobel Prize and an award of $32,000. That's the same as $468,000 in today's dollars that went to Mileva.

In 1933 Albert and Elsa emigrated to the US. They remained together until Elsa's death in 1936. Albert had series of girlfriends and female companions over the next two decades but never married again and had no other children.

The Atomic Bomb: In 1939, Einstein, along with a group of European immigrant scientists, tried to warn the United States government of the possibility that Germany could build an atomic bomb. He wrote a letter urging Roosevelt to consider the danger of Hitler's Germany winning the race to the atomic bomb, advocating that the United States should ramp up its research and production of a nuclear weapon. This action by Einstein is regarded as one of the key events that led the US to begin the Manhattan Project. Later in life, Einstein, a pacifist, expressed some reservations about his decision to advocate the development of a nuclear weapon. 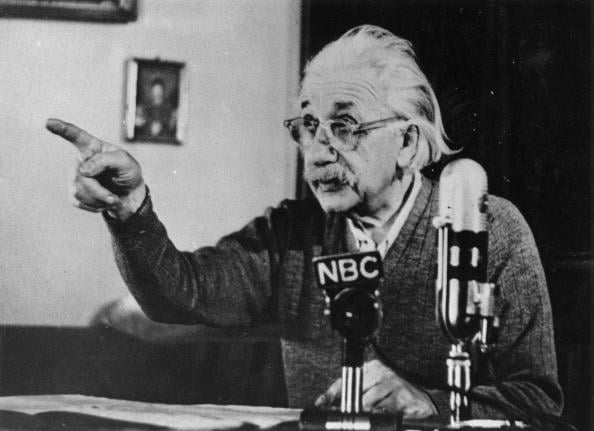 Political and Philosophical Views: Einstein was also an advocate for civil rights. Having faced discrimination as a Jew in Germany, he condemned the persecution of African-Americans in the United States. He was also a socialist and a pacifist, and was an open critic of both capitalism and war. From an early age he was very enamored with the philosophy of Emmanuel Kant, who remained one of his greatest influences throughout his life. He was not religious, but he was not an atheist; he preferred to call himself an agnostic, and revered Mahatma Gandhi, once calling him "a role model for the generations to come."

He identified as a Zionist but advocated for peaceful cooperation between Jews and Arabs in Palestine. He went back and forth on whether there should be an independent Jewish state, but condemned violence toward Palestinians. When President Truman formally recognized Israel in 1948, Einstein was elated. In 1952 he was offered the position of Israel's second president, but he declined.

Legacy: His scientific discoveries and theories penetrate almost all science today, and many of his ideas are the foundation of current research. In February 2016, for example, researchers detected gravitational waves, confirming a prediction Einstein had made a century prior.

Einstein has also penetrated popular culture in many ways. The trope of the "absent-minded professor"—often used in movies and television—is modeled after Einstein's crazy hair and distinctive facial expressions. The term "Einstein" has even become English slang to describe a very intelligent person. 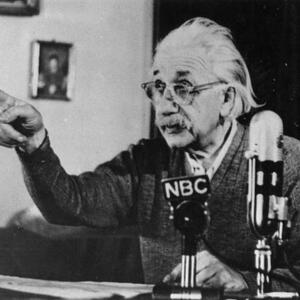