Griselda Blanco Net Worth: Griselda Blanco was a notorious drug trafficker who when working had a peak net worth of $2 billion during her lifetime. She was known as "the Black Widow," or "La Madrina," and the "Cocaine Godmother." She rose to fame and power in the 1980s running cocaine for the Medellin Cartel and designing special undergarments that would help cartel members smuggle cocaine across the border. Blanco was one of the largest distributors of cocaine throughout the country in the '70s and '80s. She was also one of the most murderous crime bosses of all time and was allegedly responsibly for at least 200 murders of men, women, and children (though the number could be as high as 2,000). Many of her victims were involved in the drug business, but others were completely innocent bystanders. Griselda worked closely with Colombian drug kingpin Pablo Escobar, who was a friend from childhood, and she was frequently called "the Black Widow" because all three of her husbands ended up dead. After running her evil empire for nearly a decade, Griselda was eventually caught and sentenced to 20 years in prison, in 1985. She was released early, then deported to Colombia over a technicality, and she was murdered in 2012 at the age of 69.

Early Life: Griselda Blanco was born Griselda Blanco Restrepo on February 15, 1943, in Cartagena, Bolívar, Colombia. Blanco moved to Medellín with her abusive mother, Ana Lucía Restrepo, at age 3, and by age 13, she was a pickpocket and prostitute. She developed a taste for violence very early, and at just 11 years old, Griselda and a group of friends abducted a 10-year-old boy from an upscale neighborhood, and when the child's family refused to pay the ransom, Blanco shot and killed the boy. When Griselda was 14 years old, she left home in order to escape her mother's boyfriend, who had been sexually abusing her.

Drug Business: Blanco was a key player in the drug trade in the 1970s and 1980s in Colombia, California, Miami, and New York. Griselda and second husband Alberto Bravo used fake passports to illegally immigrate to America in the mid-1970s. They settled in Queens, New York, and after starting a cocaine business there, Blanco and more than 30 of her associates were indicted on drug conspiracy charges. She evaded arrest by returning to Colombia, and a few years later, she moved to Miami, where her operations contributed to an atmosphere of corruption and lawlessness known as the Cocaine Cowboy Wars/Miami Drug War. Griselda's business was incredibly lucrative, bringing in $80 million per month. In 1984, Blanco's competitors grew tired of her propensity to use violent tactics against them, and they tried repeatedly to assassinate her, leading Blanco to move to California.

Arrest and Murder: On February 18, 1985, DEA agents arrested Blanco at her home in Irvine, California, and she was held without bail. Griselda was convicted of drug trafficking and received a sentence of 15 years in prison but only served 10. In 1994, she pleaded guilty to three murder charges in Miami, and after making a deal with prosecutors, she was sentenced to 10 years in prison. While serving her time, Blanco kept running her cocaine business with her son's help. She was released in June 2004 and deported to Colombia. On September 3, 2012, Griselda was shot in the head and shoulder while shopping at Cardiso butcher shop with her pregnant daughter-in-law. Her murderer rode up on a motorcycle and shot her twice at point blank range. According to a 2012 article in "The Guardian," Blanco "was credited with inventing the motorcycle ride-by killing," and Professor Bruce Bagley, author of "Drug Trafficking in the Americas," stated "It's some kind of poetic justice that she met an end that she delivered to so many others."

Personal Life: Griselda was married several times, and Carlos Trujillo was her first husband (1960 – 1969). They had three sons, Osvaldo, Uber, and Dixon, who all spent time in prison in the U.S. and were killed after being deported to Colombia; it is rumored that Blanco had Trujillo killed sometime during the 1970s. Her second husband, Alberto Bravo, died in 1975 after Blanco confronted him about money that was missing from the profits of their cartel. The two engaged in a gun battle in a Bogotá nightclub parking lot, and when it ended, Bravo and six bodyguards were dead. After recovering from a minor gunshot wound, Griselda relocated to Miami. She then married Darío Sepúlveda, and they had a son, Michael Corleone, before Darío left Griselda in 1983 and returned to Colombia. After he and Blanco couldn't come to a custody agreement, he kidnapped Michael, so Griselda had Sepúlveda assassinated, and Michael returned to his mother in Miami. Since Blanco was in prison during much of Michael's youth, he was primarily raised by his maternal grandmother and a few different legal guardians, including a minister. Michael was sentenced to house arrest in 2012 after being arrested for cocaine trafficking.

Appearances in Pop Culture: Griselda has been portrayed or featured in music, literature, and film, including the documentaries "Cocaine Cowboys" (2006) and "Cocaine Cowboys II" (2008), which is also known as "Cocaine Cowboys II: Hustlin' With the Godmother." Blanco was portrayed by Catherine Zeta-Jones in the 2018 Lifetime biopic "Cocaine Godmother," and Jennifer Lopez is set to star in and produce "The Godmother." Griselda has been referenced in the songs "See No Evil" by The Game, "Pain" by Pusha T, "Believe It" by Meek Mill and Rick Ross, "blanco griselda" by Soolking, "Suge" by DaBaby and Nicki Minaj, and several other songs, and Lil Kim's alter ego "Kimmy Blanco" is a tribute to her. Blanco is featured in the 2011 book "American Desperado" (by Jon Roberts) and 2014's "A Brief History of Seven Killings" (by Marlon James). On television, Griselda has been portrayed by Maya Rudolph on "Drunk History" and Ana Serradilla on "La Viuda Negra," and the character of Amara de Escalones on "Get Shorty" is based on Blanco. Griselda was discussed on the podcasts "Behind the Bastards" (June 5, 2018), "She Sleuths" (October 8, 2019), and "Female Criminals" (March 17, 2018, March 18, 2018, and June 14, 2020).

Real Estate: At the time of her death, Blanco reportedly owned property worth approximately $500 million. The feds seized four of Griselda's properties that were worth 2 billion pesos (around $118.7 million), and it is believed that she owned hundreds more, including an apartment that cost 550 million pesos ($32.6 million). 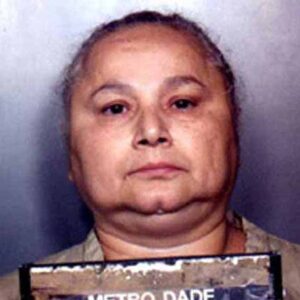