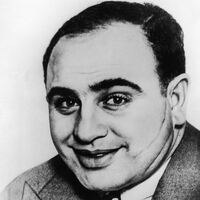 What Was Al Capone's Net Worth?

Al Capone was an American gangster who had an inflation-adjusted net worth of $100 million at the time of his death. Capone was a Five Points Gang member and worked as a bouncer for organized crime premises, and he later became boss of the organized crime syndicate the Chicago Outfit.

During the Prohibition era, Al gained notoriety and enjoyed a seven-year reign as crime boss until he went to prison for tax evasion in 1932. Capone was responsible for expanding bootlegging through violent means while maintaining relationships with city officials, such as mayor William Hale Thompson.

His downfall was the Saint Valentine's Day Massacre, which caused influential citizens to demand governmental action. Al has often been featured in popular culture, including the films "Al Capone," "The St. Valentine's Day Massacre," and "Capone," and the television series, "The Untouchables." Capone served nearly eight years of his 11-year prison sentence before being released due to his failing health in 1939, and he died at the age of 47 after suffering a stroke and cardiac arrest in January 1947.

At the peak of his power, Al's empire was generating making somewhere in the neighborhood of $60 million from illegal alcohol, $25 million from his gambling business, $10 million in vice, and another $10 million from an assortment of various other ventures. At the height of his very bloody years on top, Al was personally pulling in $105 million per year. At today's rates that amount was a cool $1.5 billion per year

Al Capone was born Alphonse Gabriel Capone on January 17, 1899, in Brooklyn, New York. His parents, Teresa (a seamstress) and Gabriele (a barber) were Italian immigrants. Al had eight siblings, Vincenzo, Raffaele, Salvatore, Ermina, Ermino, Albert, Matthew, and Mafalda; sadly, Ermina passed away at just 1 year old. Salvatore and Raffaele (better known as Frank and Ralph) both became involved with Al's criminal empire. Capone attended Catholic school, and at age 14, he was expelled for striking a teacher in the face. Al then found work at a bowling alley and a candy store, and he played semi-professional baseball for two years.

After being influenced by gangster Johnny Torrio, Capone became involved with the small-time New York gangs the Junior Forty Thieves and Bowery Boys before joining the Brooklyn Rippers. He then joined a more powerful gang, Lower Manhattan's Five Points Gang, and Torrio hired him to work the door at the Harvard Inn saloon and dance hall. While working at the Harvard Inn, Frank Galluccio slashed the left side of Al's face with a knife after he inadvertently insulted Galluccio's sister, and Capone earned the nickname "Scarface."

In 1919, Torrio invited Al to move to Chicago, and Capone began working as a bouncer in a brothel, reportedly contracting syphilis there. Torrio had been working as an enforcer for James "Big Jim" Colosimo, but after Colosimo was murdered in May 1920, Torrio took over his empire and made Al his right-hand man. Capone was a suspect in Colosimo's murder, but his involvement was never proven.

During Prohibition, Canadian bootleggers helped Al smuggle liquor into the United States, though when he was asked if he knew Canada's "King of the Bootleggers," Rocco Perri, Capone quipped, "Why, I don't even know which street Canada is on." After Torrio was shot in early 1925, he put Al in charge of his crime empire, and when establishments refused to buy liquor from Capone, they would often get blown up. Al survived an assassination attempt by the North Side Gang in September 1926, and the following year, bootlegger/gangster Joe Aiello tried to assassinate him several times.

In 1929, "The New York Times" reported that Al was connected to the murders of Assistant State Attorney William H. McSwiggin, former mentor Frankie Yale, and chief investigator Ben Newmark. Though Capone was in Florida at the time of the 1929 Saint Valentine's Day Massacre, it is believed that he ordered the attack, which was meant to eliminate North Side Gang leader Bugs Moran. Seven people were killed in the massacre, but Moran wasn't one of them. A few days later, Al was summoned to testify before a grand jury in Chicago on federal Prohibition violations, but he claimed that he was too sick to show up. When he testified in March 1929, he was arrested by the FBI and charged with contempt of court for missing the original court appearance. After the  Saint Valentine's Day Massacre, Capone tried to improve his image by donating to charitable organizations and opening a soup kitchen. In 1930, Al found out that Joe Aiello was still plotting his murder, so he had two men gun Aiello down while he was leaving a Chicago apartment building. "Chicago Daily News" publisher Walter A. Strong asked President Herbert Hoover for federal intervention to curb the city's crime, and Hoover "directed that all the Federal agencies concentrate upon Mr. Capone and his allies." 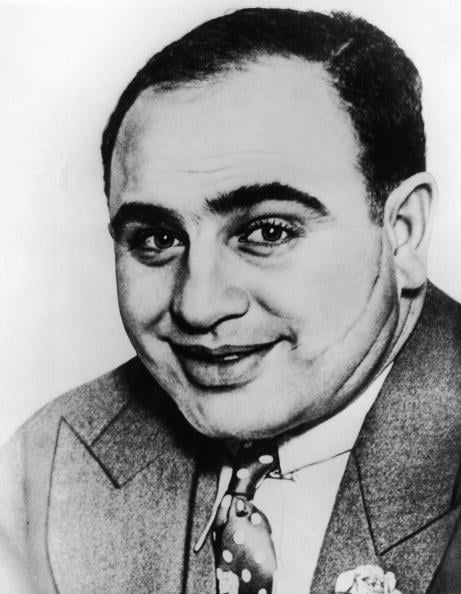 Capone was arrested for carrying a concealed weapon in Philadelphia in May 1929, and he was sentenced to a year in prison. After he was released in March 1930, the Chicago Crime Commission listed him as #1 on its list of "Public Enemies." The FBI began investigating Al for tax evasion, and he was arrested in March 1931. Three months later, he was indicted on 22 counts of income tax evasion dating from 1925 to 1929. In October 1931, Capone was convicted of income tax evasion and sentenced to 11 years in federal prison. He was also ordered to pay a $50,000 fine and nearly $7,700 for court costs. In May 1932, Al was imprisoned in Atlanta U.S. Penitentiary, where he was diagnosed with gonorrhea and syphilis. In August 1934, he was moved to Alcatraz Federal Penitentiary, and he was stabbed by another inmate in June 1936, but his wounds were superficial. Capone was diagnosed with syphilis of the brain in February 1938 and spent his final year at Alcatraz in the hospital section. In January 1939, he was transferred to the Federal Correctional Institution at Terminal Island to serve his contempt of court sentence.

Al married Mary Josephine Coughlin (better known as Mae) on December 30, 1918, and they stayed together until his death. They welcomed son Albert Francis "Sonny" Capone on December 4, 1918, and named Capone's mentor, Johnny Torrio, the godfather. As a child, a mastoid infection developed in Sonny's left ear, causing him to lose most of his hearing in that ear. He decided not to follow his father's footsteps into a life of crime (other than a 1965 shoplifting conviction) and instead worked as a used car salesman, apprentice printer, and tire distributor. Sonny legally changed his name to Albert Francis Brown in 1966. Capone reportedly had affairs during his marriage to Mae, and she told Sonny "not to do what your father did. He broke my heart."

On November 16, 1939, Capone was released from prison as a result of his failing health. Though he was referred to Baltimore's Johns Hopkins Hospital, they refused to admit him because of his reputation, but Union Memorial Hospital agreed to treat his paresis, a neuropsychiatric disorder caused by late-stage syphilis. After a few weeks of treatment, Al left for Palm Island, Florida, in March 1940. In 1942, Capone was one of the first people in America to be treated with penicillin, which helped slow down the progression of paresis.

In 1946, he was examined by his doctor and a psychiatrist, who concluded that Al had "the mentality of a 12-year-old child." Capone suffered a stroke on January 21, 1947, and though he began to improve after regaining consciousness, he contracted bronchopneumonia, then went into cardiac arrest on January 22nd. Al passed away at his Palm Island home on January 25th, after apoplexy caused his heart to fail. A private funeral was held in Chicago, and he was buried at Mount Olivet Cemetery. The remains of Al, his father, and his brother Salvatore were moved to Hillside, Illinois' Mount Carmel Cemetery in 1950.