Zhang Yiming net worth: Zhang Yiming is a Chinese businessman and entrepreneur who has a net worth of $44 billion. Zhang Yiming was born in Longyan, China in April 1983. He is best known for being the founder and CEO of ByteDance which is a Chinese internet technology company. The company's core product is Toutiao which a Chinese content platform.

ByteDance was founded in 2012. By 2019 it had more than 800 million daily users and a valuation of $75 billion. At that valuation, Zhang's net worth topped $16 billion and that made him one of the youngest tech billionaires on the planet. It also meant that ByteDance was one of the most valuable startups on the planet, worth more than ride sharing company Uber. The company purchased Musical.ly and relaunched it as Tik Tok. Zhang Yiming graduated from Nankai University with a degree on software engineering. In 2013 he made the Forbes China 30 Under 30 list. 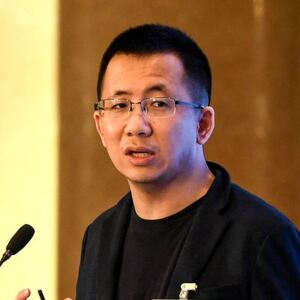