Yusaka Maezawa net worth: Yusaka Maezawa is a Japanese entrepreneur who has a net worth of $3 billion. He is perhaps best known for launching the online fashion retail website Zozotown.

Yusaka Maezawa was born in Kamagaya, Chiba Prefecture, Japan in November 1975. He founded Start Today in 1998. Maezawa launched Zozotown in 2004 and it became Japan's largest online fashion retail website. He later introduced ZOZO which is a custom-fit apparel brand and the at-home measurement system the ZOZOSUIT. He was a drummer in a band called Switch Style and then moved to the U.S. and collected CDs and records. He moved back to Japan and started selling imported albums in the mail. Zozotown is listed on the Tokyo Stock Exchange and Yusaka Maezawa resigned from the company in 2019 after selling 50.1% of the company for $3.7 billion. He also sold 30% of his personal stake. He is also known for being the first commercial passenger to attempt to fly around the moon and for being the most retweeted on Twitter with more than four million retweets of his Twitter message in 2020. 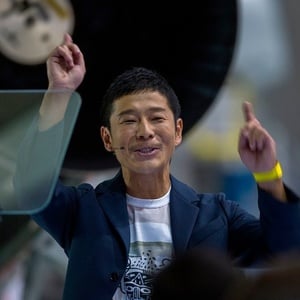