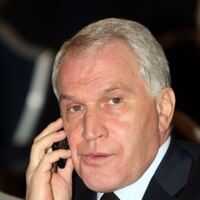 Yuri Kovalchuk Net Worth: Yuri Kovalchuk is a Russian businessman and financier who has a net worth of $650 m million. Best known as "the personal banker of Putin", he generated the bulk of his fortune through insurance, media and banking investments. Born Yury Valentinovich Kovalchuk on July 25, 1951 in Leningrad, Soviet Union, he crowned his education with a doctorate from the St. Petersburg State University. It was in the period from 1987 to 1991 that he served as the First Deputy Director at the Ioffe Physico-Technical Institute. In the beginning of the 1990s, he became a close friend of Vladimir Putin, who was a deputy mayor of St. Petersburg at the time. After Putin became President of Russia, Kovalchuk saw a drastic rise in his career. Today, Yuri is the largest shareholder of Rossiya Bank, which holds the reins of two big insurance companies, Sogas and SK Transneft. Furthermore, he has interests in six federal TV channels. Most recently (in late 2013), he acquired 50% of Tele2 Russia, the fourth-largest cellular operator in Russia.