Woody Johnson net worth: Woody Johnson is an American businessman and philanthropist who has a net worth of $3.5 billion. Woody Johnson earned his net worth through his position as the Chief Executive and Chairman of the Johnson Company Inc., the committee President for the Pre-Commissioning Unit for the USS New York.

Robert Wood Johnson IV was born in New Brunswick, New Jersey in April 1947. He graded from the University of Arizona and worked at Johnson & Johnson at an early age. Johnson is a member of the Council on Foreign Relations. He has fought on Capitol Hill to increase funding for research regarding lupus and diabetes. His daughter Casey was diagnosed with diabetes, which led him to fight even harder. He also started the Alliance for Lupus Research after his other daughter Jamie was diagnosed with the disease. Woody purchased the NFL's New York Jets in 2000 for $635 million. This came as the highest price for a team in New York, and the third highest for any professional sports team. Johnson served on a committee to help choose now NFL commissioner Roger Goodell. Johnson has been accused of participating in a sham tax shelter and settled with the IRS in 2003. Woody Johnson was formerly married to fashion model Nancy Sale Johnson. In 2009 he married Suzanne Ircha Johnson. He has had five children, although daughter Casey passed away due to diabetic ketoacidosis. He has given over $1 million to Republican candidates and committees. He helped John McCain raise more than $7 in one night and has provided funding for the Republican National Convention. 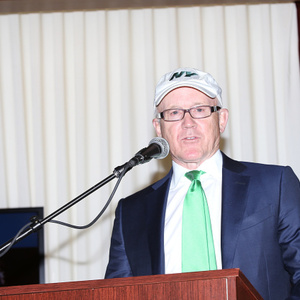