William Randolph Hearst new worth: William Randolph Hearst was an American newspaper publisher who had a net worth equal to $30 billion at the time of his death (after adjusting for inflation). During his lifetime, William Randolph Hearst built the nation's largest newspaper chain and developed methods that have profoundly influenced American journalism. His publishing empire still thrives to this day. Hearst was born on April 29, 1863 in San Francisco, California. He was the son of US Senator, and multi-millionaire mining tycoon, George Hearst. His mother, Phoebe Apperson began dating George when she was 18 and he was 40. William was their only child. George had estates up and down California, most notably in San Francisco and San Simeon (where William would eventually build the world famous Hearst Castle).

William attended Harvard University where he was a member of Delta Kappa Epsion, the AD Club, the Hasty Pudding Theatricals, and the Harvard Lampoon before being expelled for antics ranging from sponsoring massive beer parties in Harvard Square to sending pudding pots used as chamber pots to his professors with their images depicted inside the bowls. In 1887 he was in search of a career, so he took over the San Francisco Examiner, which his father had purchased in 1880. During that time he hired some of the best reporter around to work at his paper, including Ambrose Bierce, Mark Twain, Jack London, and political cartoonist Homer Davenport. While running the San Francisco Examiner, Hearst acquired the New York Morning Journal, as he knew a presence in New York was needed to create a nation-spanning, multi-paper news operation. Hearst's activist approach to journalism thrived and the term "yellow journalism" was coined to describe the stories coming out of his paper, the New York Journal, and its chief rival New York World. This type of journalism gained mass appeal through its bold headlines, aggressive newsgathering, generous use of cartoons, and human-interest stories. To aid his political ambitions and build his empire, Hearst eventually opened newspapers in Chicago, Los Angeles, and Boston. He also diversified his interests into book publishing and magazines including Cosmopolitan, Good Housekeeping, Town and Country, and Harper's Bazaar. In 1924, he also opened the New York Daily Mirror, a racy tabloid that is still in print today. The Hearst news empire reached a circulation and revenue peak in 1928, but the economic collapse of the Great Depression and vast over-extension of his empire cost him control of his holdings. Hearst also served two terms as a Democratic member of the US House of Representatives from 1903-1907. He was married to Millicent Veronica Wilson in 1903 and the couple had five sons. He became involved in an affair with popular film actress, Marion Davis, at the end of his political career and lived openly with her in California in 1919 when he started to build Hearst Castle. He remained with Davis until the time of his death in 1951 but remained legally married to his wife, Millicent, until the day of his death. Hearst left his extremely valuable estate in the hands of professional managers and trusts. None of his children or grandchildren were allowed to be involved in his various businesses. The trusts were set up to expire upon the death of his youngest living grandchild. That's expected to happen sometime in around 2035. Any heir who challenged his will would be automatically disinherited. 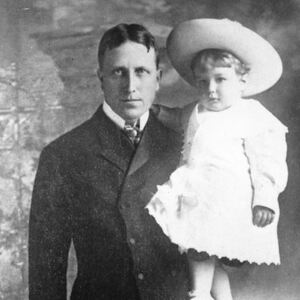