Wang Jianlin Net Worth: Wang Jianlin is a Chinese entrepreneur who has a net worth of $15 billion. Wang Jianlin is one of the richest people in China thanks to the incredible growth of his company, Dalian Wanda Group Corporation Limited. What was set up as a residential real estate company in 1988, today is one of China's largest conglomerates with activities in real estate, tourism, hotels and entertainment. Born in 1954, Jianlin spent 16 years serving in the Army, from 1970 to 1986, after which he landed the position of Office Director at the Xigang District Government in Dalian. In 1989 he became Chairman of the Dalian Wanda Group, headquartered in Dalian, Northeast China. Under his chairmanship, Wanda Group has evolved enormously, and now owns 71 Wanda shopping plazas and 40 five-star hotels throughout China. As for its most recent notable acquisitions, they include the buyout of the US based cinema operator AMC Theaters in 2012 for $2.6 billion, and the British yacht builder Sunseeker International in 2013 for USD $500 million. A member of the Communist Party of China since 1976, Jianlin got the chance to serve as a deputy to the 17th National Congress of the Communist Party of China, and then Vice Chairman of the 11th Congress of the All-China Federation of Industry and Commerce. Today he holds several notable positions as Vice President of the All-China Federation of Industry & Commerce, Vice Chairman of the China Enterprise Confederation and the China Enterprise Directors Association, Vice Chairman of the China General Chamber of Commerce and Vice Chairman of China Charity Alliance. To date, Wang Jianlin has been honored with several accolades for his outstanding achievements in both business management and corporate social responsibility. Most notably, he has been named CCTV's Chinese Economic Person of the Year two times, as well as he received three China Charity Awards from the Ministry of Civil Affairs. In 2013, he earned the title of Honorary President of the China Charity Federation.

Net Worth details: Wang owns a majority stake in Chinese developer Dalian Wanda Commercial Properties. He took the private company to the Hong Kong Stock Exchange in 2016 and owns about 54 percent of the company along with his wife and son. He also owns 60 percent of Wanda Cinema Line and his film company Wanda Pictures purchased Legendary Entertainment for $3.5 billion in 2016. Wang is an art collector who owns more than 1,000 paintings and other pieces valued at $1.6 billion. 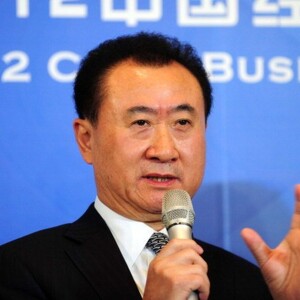