Wang Changtian Net Worth: Wang Changtian is a Chinese media mogul who has a net worth of $1.9 billion. Wang Changtian is president of Beijing Enlight Media Co, China's largest private media and entertainment group which currently has networks in 70 cities. When the Enlight-produced, low-budget movie Lost in Thailand exceeded $128 million at the box office , and the company subsequently went public in August 2011, Wang's wealth was exponentially increased by hundreds of millions of dollars.

Wang continued to devote himself to making movies. In the second half of 2012, Enlight adjusted its strategy by cultivating several new mainland directors such as Gao Qunshu and Xu Zheng. Wang also cultivated actors-turned-directors such as Xu Zheng. "There are many people smarter than Wang in the world, but not so many like him who possess the qualities of being both smart and diligent," said his younger brother Wang Hongtian, also one of Enlight's founders. Wang describes himself as a boring man who likes to read, see movies and enjoy fine food. He is also, reportedly, a person who is always calm and does not generally outwardly exhibit joy or anger. 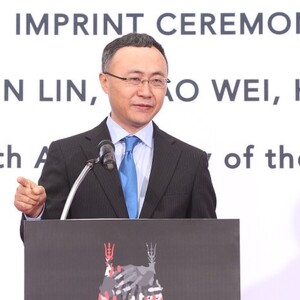