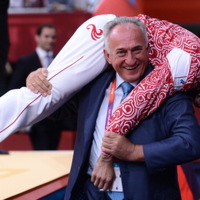 Vasily Anisimov Net Worth: Vasily Anisimov is a Russian entrepreneur who has a net worth of $2.7 billion. Born Vacily Vasilievich Anisimov on September 10, 1951 in Alma-Ata, he earned his wealth as Co-Founder of Coalco, a development company. Already a graduate of Alma-Ata Institute of National Economy at the time, Anisimov headed the Kalinin Nuclear Power Station from 1982 to 1986, and the next three years, he served as the Head of Roskhoztorg Moscow branch. In 1992, Anisimov launched Trust Company, which became a special exporter for the sale of non-ferrous metals. Later, he renamed the company into Trustconsult, and he started trading aluminum. Then in 1994, Anisimov launched his development company Coalco in Switzerland, and soon, he took over the shares of Krasnoyarsk Aluminum Plant, Achinsk Alumina Refinery and Bratsk Aluminium Plant. Six years later, after the assassination of his daughter, Anisimov sold everything to Renova, but in 2004, he came out of the shadows as a backer of Metaloinvest Holding, together with his fellows Andrei Skoch and Alisher Usimanov. In addition to his fortune, in 2010, he bought shares in 11 Russian alcohol companies from VTB.