Tom Gores Net Worth: Tom Gores is an American businessman who has a net worth of $6 billion. Gores earned his fortune is best known as the founder, Chairman and CEO of Platinum Equity, a global private equity firm founded in 1995 with headquarters in Beverly Hills, California. On June 1, 2011, Tom Gores and Platinum Equity became the owners of the National Basketball Association's Detroit Pistons. In 2015 Gores bought Platinum's share to give him 100% ownership.

Gores regularly donates to numerous philanthropic and charitable organizations and is known for his connection with the players and fans of the Detroit Pistons.

Tom's brother, Sam Gores, is the chairman of Paradigm Talent Agency in Beverly Hills, CA, and is ranked among the top agents in Hollywood. One of his other brothers, Alec Gores, is also an American billionaire who is the founder and CEO of the private equity firm Gores Group.

Early Life: Tom was born on July 31st of 1964, in Nazareth, Israel. He was the fifth of six children in a Catholic household. His father was of Greek descent, while his mother was of Lebanese ancestry. When Gores was five years old, his family emigrated from Israel and settled in the small city of Genesee, Michigan. He had his first job stocking shelves at his uncle's grocery store in Genesee.

Tom attended Genesee High School, where he played football, baseball, and basketball. After high school, Gores enrolled at Michigan State University. He worked as a telemarketer and janitor to support himself through university. In 1986, Tom graduated, earning his Bachelor of Arts in construction management.

Career: After university, Gores helped found a lumber-logistics software firm called Ventech. In 1989, Tom and his wife moved to Los Angeles to run the firm's West Coast operations. Six years later, Gores founded Platinum Equity in his home and began cold-calling businesses to ask if they had divisions they were looking to offload. Tom secured his first project with Litigation Services, Inc., a then-failing firm that created computer-generated recreations of car accidents for courtroom evidence and testimony. Gores acquired the firm for $200,000, and within six months, he returned it to a profitable organization.

Between 1996 and 2001, Tom led 32 significant acquisitions, including Williams Communications, Pilot Software, and Rascal. In 2002, Platinum Equity's portfolio included units in Fujitsu, Alcatel, and Motorola, and that year Gores made the Forbes list of 400 wealthiest Americans. In 2006, Platinum Equity acquired PNA Steel, and two years later sold it to Reliance Steel & Aluminum Co. for a net profit of $512 million. In 2009, Tom purchased The San Diego Union-Tribune for $30 million and sold it in 2011 for $110 million. By the end of 2009, Gores had facilitated over 100 deals through Platinum Equity.

In 2011, Tom and Platinum Equity purchased The Detroit Pistons and their former arena, The Palace of Auburn Hills. He bought the two for $325 million, which was reported as a "shocking bargain." Gores immediately approved a $10 million renovation of the arena and instituted a program called "Seats for Soldiers," which provided free tickets to events for US military members and their families. He also implemented the "Come Together" program to celebrate community service, leadership, and volunteering throughout Michigan.

In 2015, Tom purchased Platinum Equity's share in the Pistons, becoming the franchise's sole owner. In 2016, Gores made a deal with the Detroit Red Wings owners to allow the Pistons to share the new Little Caesars Arena in downtown Detroit. As of 2018, the Pistons were valued at $1.1 billion, a gain of $775 million since Tom's acquisition in 2011. Gores is known for his connection with the members and fans of the Detroit Pistons and plays an essential role in supporting the team.

Philanthropy: Tom supports numerous philanthropic and charitable organizations. He served on the board of trustees of the Los Angeles County Museum of Art and was a member of the board of directors at both St. Joseph's Hospital and the UCLA Medical Center. Gores and his family support the Children's Hospital in Los Angeles, particularly the Division on Clinical Immunology and Allergy. In 2016, the family donated $5 million to the Children's Hospital to establish the Gores Family allergy center, providing comprehensive care and research into allergy studies.

In 2016, Tom established FlintNOW, an organization that raised $10 million to supply relief to the residents of Flint, Michigan, affected by the city's water crisis. Gores regularly donates toys to children in Flint and Detroit through the Toys for Tots program and has provided substantial support to the Jalen Rose Leadership Academy, S.A.Y Detroit, and Genesee High School.

Relationships: Gores is married to his wife, Holly. They began dating in the late '80s and married in 1995. They have three children, Amanda, Catherine, and Charles.

Real Estate: In 2016, Gores purchased a sprawling, contemporary-style mansion in the Holmby Hills neighborhood of Los Angeles, CA, for $100 million. The house is situated on 3.2 acres of land and features over 30,000 square feet of interior space. The mansion has ten bedrooms and twenty bathrooms spread across the primary residence and its guest houses.

The master suite alone is 5,300 square feet, twice the size of the average American home. Other features include a wine room, a lounge, and a theatre complex with a separate valet entrance for guests. There is a spa with a cascading indoor water wall that flows into a lap swimming pool, a hair salon, a manicure/pedicure area, and steam and massage rooms. Tom is also reported to own a condo in Birmingham, Michigan. 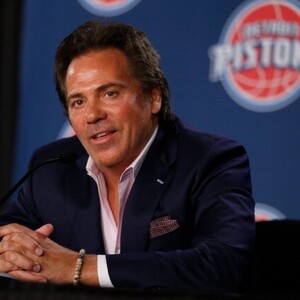