How much is Thomas & Raymond Kwok Worth?

Thomas & Raymond Kwok Net Worth: Thomas & Raymond Kwok are Chinese businessmen and entrepreneurs who have a combined net worth of $17 billion. Thomas & Raymond Kwok were born in Hong Kong in 1951 and 1952, respectively. Thomas and Raymond are the sons of Kwok Tak Seng, the founder of SHK Properties, and his wife Kwong Siu-hing. Together with brother Walter, they inherited Sun Hung Kai Properties, Hong Kong's largest real estate developer, in 1990 following their father's death. Thomas holds a Master of Business Administration degree from London Business School, University of London and a Bachelor's degree in Civil Engineering from Imperial College, University of London. Raymond holds a law degree from Cambridge University, an MBA from Harvard University, an Honorary Doctorate in Business Administration from the Open University of Hong Kong and an Honorary Doctorate in Laws from the Chinese University of Hong Kong. The Kwoks experienced a big drop in wealth after the family resolved their differences and eldest brother, Walter, received an equal entitlement to shares of Sun Hung Kai Properties. Walter now runs his own business. SHKP's stock price was reportedly down more than 20% in 2014, while the Hang Seng Index had been flat. The company controls one of the largest property portfolios in Greater China, having built many of the iconic buildings that define Hong Kong's skyline. In March 2012 both brothers, Thomas and Raymond, were arrested on bribery charges involving alleged payments and loans to Hong Kong's former No. 2 official Rafael Hui. Thomas and Raymond Kwok now face charges of bribery and conspiring to commit misconduct in public office. The trial was slated to begin on May 2014. 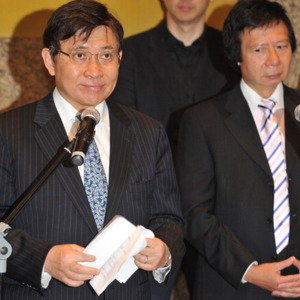