Thomas Barrack Net Worth: Tom Barrack is an American private equity real estate investor who has a net worth of $1 billion. Mr. Barrack has created his enormous fortune as the founder, chairman and CEO of Colony Capital, a private, international investment. He is known for being an extremely close ally of former President Donald Trump. In July 2021 Tom was arrested by the FBI on allegations that he worked as an unregistered agent of the United Arab Emirates.

Early Life: Thomas Joseph Barrack Jr. was born on April 28, 1947 in Los Angeles, California. He was raised in Culver City, California where his father ran a grocery store and his mother worked as a secretary.

He attended USC for both undergrad and law school but ultimately earned his Juris Doctor from the University of San Diego in 1972.

Career: After graduating he landed a job at the law firm that represented President Nixon personally. Very early into this job, the firm sent Tom to Saudi Arabia where he became friendly with several important members of the Saudi Royal Family. He was at one point a regular squash partner with a Saudi prince.

After returning to the US in the early 1980s, Barrack began working as the deputy undersecretary of the Department of the Interior.

In 1987 he was made a partner at the Robert M. Bass Group. Around this time he began working with Donald Trump on real estate deals.

In 1988 Barrack orchestrated Trump's $410 million acquisition for 100% ownership in the Plaza Hotel.

Colony Capital: In 1990 Thomas founded Colony Capital. Over the following decades he invested hundreds of millions of dollars into real estate in the Middle East and Europe.

As of this writing Colony Capital has more than $50 billion in assets under management.

Neverland Ranch: In May 2008, Colony Capital purchased the majority of Neverland Ranch out of a foreclosure auction for $22.5 million. They attempted to sell the ranch at one point for $100 million, ultimately accepting $22 million in December 2020. The buyer was billionaire Ronald Burkle. 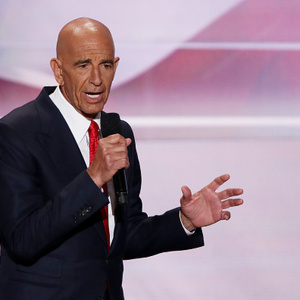