What is Ted Turner's net worth?

Ted Turner is a media giant and entrepreneur from Ohio who has a net worth of $2.2 billion dollars. Ted Turner earned his fortune as the creator of CNN, TNT, TBS and as the former owner of the Atlanta Braves. Ted Turner has left his mark on the media landscape by creating CNN, WTBS, MGM, TNT, and Cartoon Network.

Outside of his media empire Ted owns Ted's Montana Grill chain and is the second largest landowner in the United States. He owns two million acres of land in the United States and can reportedly ride a horse from Canada to Mexico without leaving his own property.

Ted Turner was born in Cincinnati, Ohio on November 19, 1938. His family moved to Savannah, Georgia when he was a young boy. Turner attended a private all boys academy called The McCallie School in Chattanooga, Tennessee. He then attended Brown University where he was the captain of the sailing team and vice president of the Brown Debating Union. His was a Classics major, which was quite a disappointment to his father. So, later on he decided to change his major to Economics. He never graduated from Brown University because he was caught with a girl in his dorm, which resulted in expulsion.


After he was expelled from school, Turner took over his father's thriving Billboard business, in Macon, Georgia. After his father committed suicide in March 1963, he installed himself as the president and chief executive of Turner Advertising Company. The business became quite a success, especially during the Vietnam War, and Turner used the profits to purchase many Southern radio stations.


He then sold the radio stations and bought a UHF television station, WTCG. He was sure it would be a money maker, and it was. He would pick up shows that VHF would let go including I Love Lucy, Gilligan's Island, Star Trek and others. Later he bought UHF station WRET, channel 36. In 1976, Turner bought the Atlanta Braves and the Atlanta Hawks the following year, partially with the objective to provide programming for WTCG. He used the WTBS superstation's status to broadcast Braves games into nearly every house in the U.S., turning the team into a household name before their success in the '90s and early 2000s.

In 1978, Turner contacted media exec Reese Schonfeld about plans to found a 24-hour news channel. They agreed it could be done with a staff of 300 if they used an all electronic newsroom and satellites for all transmissions. The next year, Turner sold WRET to fund the transaction and established its headquarters in Atlanta. Schonfeld was appointed president and chief executive of the Cable News Network, now known as CNN. Turner became CEO of CNN in 1982.

In 1986, Turner created Turner Entertainment, established to oversee film and TV properties owned by Turner. Turner acquired MGM's library of 2,200 films made before 1986 and had them syndicated on his nationwide TV stations. When broadcasting older films, Turner aired colorized versions of films originally shot in black and white, drawing ire from cinephiles around the nation. Roger Ebert wrote of Turner's broadcast of a colorized "Casablanca": "That will be one of the saddest days in the history of the movies. It is sad because it demonstrates that there is no movie that Turner will spare, no classic however great that is safe from the vulgarity of his computerized graffiti gangs."

In 1988, Turner purchased Jim Crockett Promotions which he changed to World Championship Wrestling, which became the main competitor to Vince McMahon's World Wrestling Federation (WWF.)  The same year he introduced Turner Network Television (TNT) with "Gone with the Wind." TNT initially showed older movies and TV shows and then eventually added original programming and newer reruns in. He would later create Turner Classic Movies in 1994, which aired his pre-1986 MGM library of films alongside those of Warner Bros made before 1950.

In 1990 he created the Turner Foundation, and came up with the idea of the environmental superhero, Captain Planet. In 1993, he co-founded The Moscow Independent Broadcasting Corporation, with Eduard Sagalejev, a Russian journalist. When Turner Broadcasting System merged with Time Warner, Turner became the vice chairman and head of the cable networks division for Time Warner in October 1996. Turner was dropped as head of cable networks by CEO Gerald Levin but remained as Vice Chairman of Time Warner. He resigned as chairman in 2003 and resigned from the board of directors in 2006. In 2001, Time Warner was purchased by AOL to become AOL Time Warner. Due to poor profits and stock performance, the company dropped "AOL" from its name in October 2003. AOL was spun off entirely from the Time Warner conglomerate in December 2009. In June 2014, Rupert Murdoch's 21st Century Fox made a bid for the company at $80 billion. Time Warner rejected the offer and it was formally withdrawn in August 2014.

Ted Turner is also the creator of the animated television show the "Planeteers." He is the co-founder of Ted's Montana Grill, which now has expanded to 46 restaurants located in 16 states. Turner and George McKerrow Jr. (a restaurateur) opened their first Ted's Montana Grill in Columbus, Ohio, in 2010. 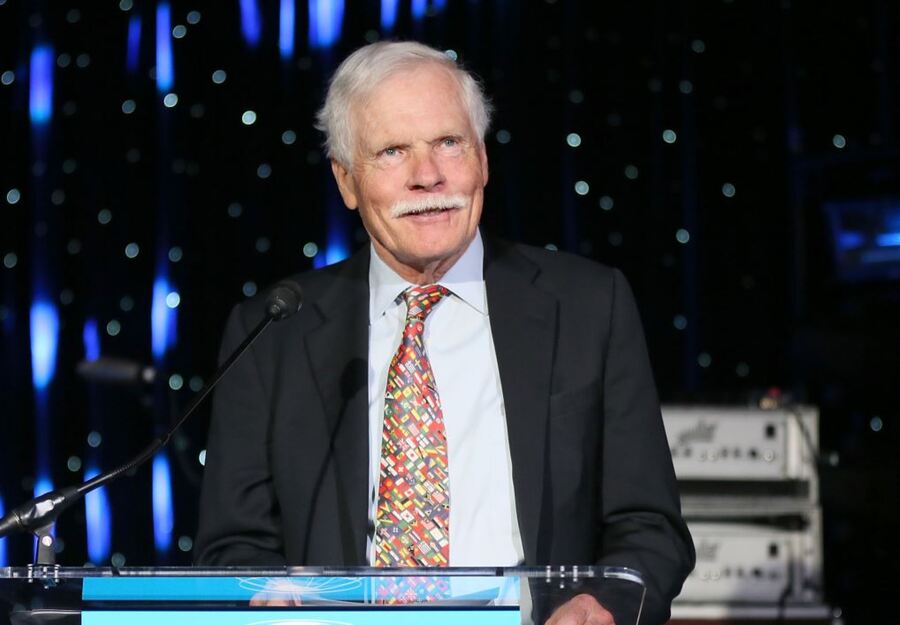 Ted is a noted philanthropist who gave the largest single gift of all time to the United Nations. In 2010, he joined Warren Buffet's The Giving Pledge, vowing to donate the majority of his fortune to charity upon his death.

Between the three marriages, Turner is the father of five children. Through Turner Enterprises, he owns 15 ranches in the United States totaling 1,910,585 acres, making him one of the largest individual landowners by acreage in North America. His biggest ranch is in Vermejo Park in New Mexico and is the largest privately owned tract of land in the United States. Turner revealed in 2018 that he is suffering from Lewy body dementia.

Turner is an avid sailor and entered several competitions at age 26 through the Savannah Yacht Club. He competed at the Olympic trials for sailing in 1964. He attempted to win America's Cup in 1974 aboard the Mariner and appeared on the cover of Sports Illustrated on July 4, 1977 after he was chosen to lead the 1977 America's Cup defense as skipper of the yacht Courageous. He successfully defended America's cup in September 1977 against Australia 4-0. Turner was inducted into the America's Cup Hall of Fame in 1993 and the National Sailing Hall of fame in 2011.

Ted reportedly paid Jane over $100 million in liquid assets alone (cash, stock), including stock in his company right before it merged with AOL at the peak of the dotcom bubble. She also received several valuable real estate assets such as a 2,500 acre ranch. And while that may seem like a big deal, a single 2,500 acre ranch is a tiny speck in Ted Turner's portfolio. As of this writing, Ted is the second largest landowner in the United States with roughly two million acres of personal and ranch land. He owns enough land to be able to ride a horse from Canada to Mexico without leaving his own property. 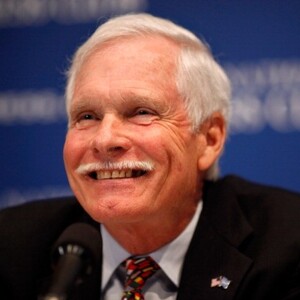