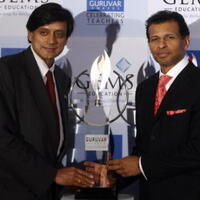 Sunny Varkey Net Worth: Sunny Varkey is an Indian entrepreneur who has a net worth of $1.6 billion. Sunny Varkey entered the world's richest list this year as the chairman of GEMS Education, an international K-12 education company that owns and operates high performing schools. Born to Indian expat teachers who migrated to Dubai in 1959, he has never gone beyond high-school. Before he got the chance to take over control of his parents' Our Own English School in 1980, Varkey did literally everything from laying bricks for school buildings to driving the school bus. Nowadays, GEMS Education is the world's largest operator of private kindergarten-to-grade-12 schools. It has built a network of 132 schools that house 142,000 students and 13,400 staff, mainly teachers, all over the Middle East, Africa, Europe, China, and India. As part of its constitution, GEMS has a consultancy that advises both governments and nonprofits, as well as a GEMS Foundation which thrives to improve the lives of 100 impoverished children for each child enrolled at a GEMS school. Bill Clinton serves as honorary chairman of Varkey's GEMS Foundation.