Stef Wertheimer net worth: Stef Wertheimer is a German-born Israeli billionaire who has a net worth of $5.3 billion. Stef Wertheimer made most of his fortune through the small metal tool cutting factory called ISCAR that he started in his backyard in 1952. ISCAR quickly became a success and attracted investors like Discount Investments, who eventually became its minority shareholder.

However, Wertheimer's company first drew international attention in 2006, when it became the first major international target of Warren Buffett's Berkshire Hathaway. At the time, Wertheimer sold 80% of Iscar to Buffett leaving for himself only a 20% stake in the company, currently run by his son Eitan. As of today, ISCAR is one of the largest (by sales) producer of carbide industrial-cutting tools that are used by world-wide known car-makers like General Motors and Ford. With numerous branches in over 50 countries worldwide, the company employs nearly 6,000 people. However, the company struggled through 2012, being hit by tough economic conditions. Apart from making money, he has also donated more than $100 million to his own method of creating a lasting peace between the territories of Israel and the Palestine. For his peace-making efforts, Wertheimer was honored with Oslo Business for Peace Award in 2010. As of March 2013, Stef Wertheimer is the 3rd richest person in Israel. 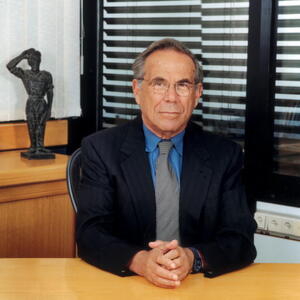