Sidney Kimmel Net Worth: Sidney Kimmel is an American producer, businessman and philanthropist who has a net worth of $1.3 billion. In filmmaking, he worked on such features like "The Kite Runner" and "Death at a Funeral", whereas in business, he is known as the founder of the Jones Group apparel company.

Still, his most far-reaching role is the one of a philanthropist. With a goal to donate $1 billion in total throughout his lifetime, Kimmel is an active giver in the fields of healthcare, education, arts and culture. Of Jewish descent, Sidney Kimmel was born in 1929, in Philadelphia, where he attended Temple University. Not finishing school, he preferred to work at W. R. Grace and Company before establishing Jones Apparel Group in 1970. He left his position as CEO of the company in 2002, but still remains chairman of the board of directors. He is now focused on his movie production company, Sidney Kimmel Entertainment, which most recently released "Stand-Up Guys" (2012), featuring Al Pacino, Christopher Walken and Alan Arkin. Furthermore, he owns arts, real estate, as well as a 5% stake of the Miami Heat basketball team. It was in 2010 that he joined the Gates-Buffett Giving Pledge, some seven years after setting up his Sidney Kimmel Foundation and its subsidiary, the Sidney Kimmel Foundation for Cancer Research. 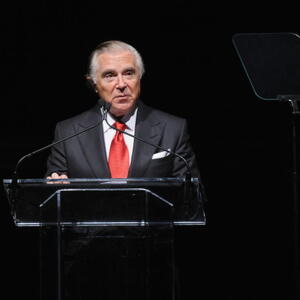