Shivinder Singh net worth: Shivinder Singh is an Indian businessman who has a net worth of $-500 million dollars. At one point, the Singh brothers had a combined net worth of $2.5 billion. They lost their fortune through a series of bad investments and loans to a guru who reportedly turned out to be a fraud.Along with his brother, Malvinder, Shivinder Singh is one of the heirs to the Ranbaxy Laboratory fortune created by the grandfather.

He was managing a director of Fortis Healthcare and the guiding force behind AIESEC India, the largest student directed organization in the world. His grandfather Bhai Mohan Singh founded Ranbaxy Laboratories. Shivinder and his brother Malvinder Mohan Singh inherited the family's 33.5% stake in Ranbaxy when their father passed away in 1999. They are both listed among the Top 20 richest Indians. Singh graduated with honors from St. Stephens College and he received an MBA from Duke University's Fuqua School of Business. The brothers sold their pharma inheritance in 2008 for $2 billion. They have also sold additional assets for hundreds of millions of dollars. Their newest venture is Air Mantra and the brothers are behind the largest student directed organization in the world, AIESEC India. Shivinder Singh is married and has three children. The brothers loaned a large amount of money to a guru. As of August 2018 they owe a $500 million fine for fraud in connection with the sale of their drug company in 2008. They are being sued of billions that were allegedly siphoned out of their financial company and healthcare company. 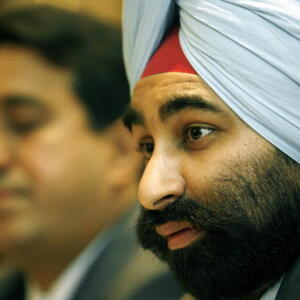