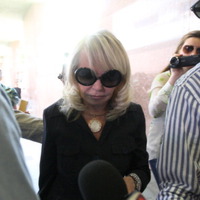 Shelly Sterling net worth: Shelly Sterling is the wife of former Clipper's owner, Donald Sterling. Shelly Sterling, also known as Rochelle Stein, married Donald Tokowitz in 1955. They changed their name to Sterling a few years later, when Donald was in law school. They went on to have three children together and to rise up the ranks of California's rich and famous. Donald Sterling made a name for himself as a divorce and personal injury lawyer, and then branched out into real estate investment. He purchased the San Diego Clippers, now known as the Los Angeles Clippers, in 1991. Shelly Sterling was known for loving the team, and was considered one of the franchise's biggest fans, even though it struggled for many years. Donald Sterling has been sued multiple times for sexual harassment and has appeared in public with various mistresses over the years. He was recently stripped of his Clippers ownership and membership in the NBA due to a series of racially charged remarks. In the aftermath, Shelly arranged to sell The Clippers to Microsoft billionaire Steve Ballmer for $2 billion cash. Shelly Sterling is currently suing his latest mistress for money that she supposedly embezzled from the Sterling's joint accounts.