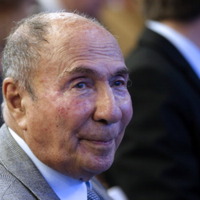 Serge Dassault net worth: Serge Dassault was a French heir, business executive and politician who had a net worth of $17 billion at the time of his death. Serge Dassault died on May 28, 2018 at the age of 93. Born in France in the 1920s, Serge Dessault attended Lycée Janson de Sailly, the École polytechnique, Supaéro and HEC Paris. His father founded the aviation company, Dassault Aviation. During his teens, he spent time in jail, when his father was sent to Buchenwald concentration camp for refusing to work with the German airplane industry during World War II. After his father passed away, he inherited the company. He went on to expand it into the Dassault Group. As Chairman and CEO of the Dassault Group, Serge Dassault acquired holdings in media, aerospace engineering, and software. When he was not focused on Dassault Group matters, he was very politically active. He was the former Mayor of Corbeil-Essones, and was part of the Union for a Political Movement party. He became a senator in 2004, and was known for his outspoken stances on both economics and unemployment.

Net Worth details: Through his family, Serge Dassault owned 41% software manufacturer Dassault Systemes and 62% of aircraft maker Dassault Aviation. His family owns the Bordeaux winery Chateau Dassault. He acquired Le Groupe Figaro in 2004 and owned a 55% stake in the largest auction house in France, Artcurial.