Robin Li net worth: Robin Li is a Chinese businessman who has a net worth of $13 billion dollars. He is known as one of the richest internet entrepreneurs of all time. Born in Yangquan, Shanxi, China, Robin Li, also known as Yanhong Li, and excelled throughout his career in academics. He eventually received the highest score of any student ever in Yangquan on China's National Higher Education Entrance Exam, and subsequently went on to graduate from Peking University with a degree in Information Management. After that, he then earned his Master's degree in the United States, from SUNY-Buffalo in Computer Science. His first real job was soon to follow, with IDD Information Services. While employed with IDD, he worked to develop and improvedvarious algorithms related to improving search engines. In the mid-90s, he patented an algorithm for site-scoring called, Rankdex. In 2000, he launched his own search engine, Baidu, using his algorithm. Baidu is now the largest search engine used in China, and the third largest independent search engine in the entire world. Baidu is also permanently in the record books as the first Chinese company to be part of the NASDAQ-100, and Mr. Li has been featured in multiple publications. In 2007, he was also included in CNN's list of "50 People Who Matter Now". On the personal front, Li is married to a Dongmin "Melissa" Ma, who is also employed with search engine Baidu. The two have four children and live in Beijing.

Net Worth details: Robin Li holds a 21 percent stake in China's most popular search engine, Baidu. He also controls a 5 percent stake through his wife Melissa Ma. Together the couple owns more than 7 million Class A and Class B shares in Baidu. Each of those shares equals 10 American depository receipts which are traded publically on NASDAQ. Baidu reported $10.6 billion in revenue in 2016. 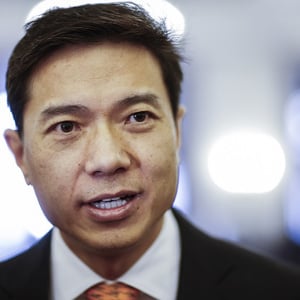