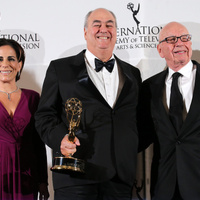 Roberto Irineu Marinho Net Worth: Roberto Irineu Marinho is a Brazilian businessman who has a net worth of $7 billion. Along with his two brothers, Joao Roberto Marinho and Jose Roberto Marinho, he controls Rede Globo. It's Latin America's largest media group, which was founded by Marinho's father, Roberto Marinho, and today holds about half of Brazil's television market. Apart from the fact they have taken over control of Rede Globo upon their father's death in 2003, the brothers also own O Globo newspaper of Rio de Janeiro, whereas Roberto has a farm called Farm Sertaozinho in his possession. The Marino brothers are not only great businessmen but also avid supporters of educational and cultural causes via their Roberto Marinho Foundation. In addition to being one of the richest people in Brazil, Roberto Irineu Marinho is a married man with three children.