What is Robert Kraft's net worth?

Robert Kraft is a Massachusetts-born businessman who has a net worth of $7 billion dollars. Robert Kraft made his fortune as Chairman and CEO of The Kraft Group, which holds assets in everything from paper to real estate. He is most widely known as the primary holder of the New England Patriots, the New England Revolution, and Gillette Stadium.

There is a popular misconception that Robert Kraft earned his fortune from grocery manufacturing conglomerate Kraft Foods. This is not at all true. Robert Kraft has absolutely no connection to Kraft Foods, which is known for products like Grey Poupon, A1, Gevalia, Planters, Jell-O, Kraft Singles, Velveeta, Kool-Aid, Cadburys, Oscar Mayer, and Maxwell House.
Table of Contents

Robert K. Kraft was born on June 5, 1941, in Brookline, Massachusetts to Sarah and Harry Kraft. He grew up in a Modern Orthodox Jewish working-class family. In 1959, he graduated from Brookline High School, where he was senior class president. Kraft attended Columbia University where he was once again class president. He was also a member of the Zeta Beta Tau fraternity and played on the school's freshman and lightweight football teams. Kraft graduated from Columbia in 1963 and enrolled at Harvard, where he graduated with his MBA in 1965.

When Kraft was 27 and pretty fresh out of Harvard, he was elected chairman of the Newton Democratic City Committee. He briefly considered running for Massachusetts's 3rd congressional district seat in 1970, but ultimately decided not to as he was concerned about the strain it would put on his family as well the lack of privacy.


Kraft's first professional experience was with the Rand-Whitney Group, a packaging company run by his father-in-law Jacob Hiatt. In 1968, Kraft spearheaded a leveraged buyout to take control of the company. He is chairman of the Rand-Whitney Group to this day. Kraft founded International Forest Products, a trader of physical paper commodities in 1972. The two paper and packaging companies are the largest privately held companies  in that industry in the U.S.

Kraft was also an investor in New England Television Corp., which took control of WNAC-TV in 1982. In 1983, he became a member of the board of directors. The station became WNEV-TV and in 1986, he was named president of the corporation. In 1991, he exercised his option to sell his shares for $25 million. Kraft also acquired several Boston radio stations. Eventually, he formed his Kraft Group paper business in 1998, which operates in 90 countries and has sales over $2 billion. 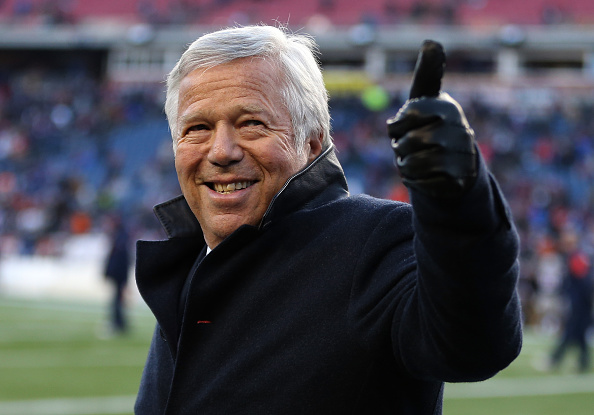 Robert Kraft has been a Patriots fan since their American Football League days and a season ticket holder since 1971. In 1985, he bought the parcel of land right next to the New England Patriots' Stadium. This was the first in a series of steps that now appear to have been Kraft's master plan to own the New England Patriots. Step two was in 1988 when Kraft outbid a slew of competitors to buy the stadium, which at the time was in bankruptcy court for $25 million. As a condition of the purchase, Kraft also acquired the stadium's lease to the Patriots. This point is key, as it is an integral piece of Kraft's master plan to eventually purchase the team.

At the time, rumors were swirling across Boston that the Patriots were moving to St. Louis because it was well known that then-owner James Orthwein wanted the NFL to return to his hometown. St. Louis had been without an NFL franchise since 1988 when the Cardinals moved to Arizona. He even had a new name picked out for the team: The St. Louis Stallions. There was just one problem: In order to leave Massachusetts, Robert Kraft would need to agree to allow the team to buy out the remaining years on their stadium's lease agreement.

James Orthwein offered Kraft $75 million in 1994 to buy out the remainder of the team's lease at Foxboro Stadium. Had Kraft agreed, the Pats would have moved to St. Louis. However, Robert Kraft saw an opportunity and seized it. He made a counter bid of $175 million (equal to $300 million today) – at the time a record for the NFL – to purchase the Patriots. This was a shocking amount of money to pay for a team that at the time was one of the least valuable franchises in the league. Knowing that getting out of the lease would be an insurmountable hurdle, Orthwein accepted the offer. Sixteen years and six Super Bowl titles (in 10 Super Bowl appearances) later, the New England Patriots are worth $4.1 billion.

In February 1962, he met Myra Hiatt at a deli in Boston. They married in June 1963.  The couple had four sons: Jonathan, Daniel, Joshua, and David. The Krafts were members of Temple Emanual in Newton, Massachusetts. Myra Kraft died due to ovarian cancer on July 20, 2011. She was 68-years-old.

In June 2012, Kraft started dating actress Ricki Noel Lander, who is 39 years younger than he is. Lander gave birth to a child in the fall of 2017. While there was speculation that Kraft was the father, he denied paternity of the child when the birth was announced in May 2018. Kraft and Lander broke up in 2018.

On February 22, 2019, Kraft was charged with misdemeanor charges for "soliciting another to commit prostitution," by the chief of police in Jupiter, Florida. The charges came about due to a human trafficking sweep at the Orchids of Asia Day Spa. Investigators suspected the managers of the spa were sex trafficking women, forcing the women to perform sex acts on clients. Kraft was allegedly video recorded taking part sexual activity at the Orchids of Asia Day Spa. On March 19, 2019, Kraft was offered a plea deal, which he rejected as it would require him to admit he was guilty. On March 26, his attorneys filed legal documents in which Kraft pleaded not guilty to all charges and requested a jury trial. In August 2020, a Florida court ruled that Kraft's constitutional rights were violated when police confiscated the alleged video tapes of Kraft engaging in sex acts at the spa. The court blocked the prosecution from using the alleged videos in court.  On September 24, 2020 all charges against Kraft were dropped due to lack of evidence. 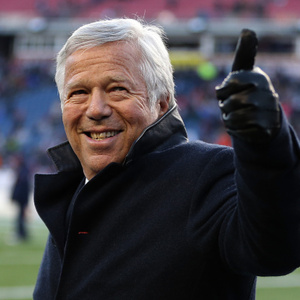