What is Robert F. Smith's net worth?

Robert F. Smith is an American businessman, entrepreneur and philanthropist who has a net worth of $9 billion. Robert F. Smith is the wealthiest black person in America and one of the 125 richest people in the United States overall. In 2017 he became the first black man to sign the Giving Pledge. An active philanthropist, he has already moved quickly to give away large portions of his net worth. More details on his philanthropy later in this article.

Robert earned his net worth as the founder, Chairman, and CEO of Vista Equity Partners LLC. Founded in 2000, today Vista Equity Partners controls more than $50 billion in assets and has delivered an average annual return north of 30% since its inception. Vista, the global leading investment company was founded in 2000. Its focus on companies in the software and technology sectors, differentiated it early and led to its current success. Smith's background as a chemical engineer greatly contributed to Vista's early identification of software as a prime investment market.

Smith earned a bachelor's degree in chemical engineering from Cornell University in 1985. During high school and college Smith maintained an internship at Bell Labs. Following Cornell, Smith was an engineer with Goodyear Tire & Rubber until 1988 when he left for a position at Kraft General Foods. Smith's interest in finance led him to leave Kraft to attend Columbia Business School at Columbia University, where he got his MBA, graduating with honors in 1994. Smith then worked for Goldman Sachs in the Mergers & Acquisitions division until his entrepreneurial debut with Vista in 2000.

Robert F. Smith was born on December 1, 1962 in Denver, Colorado. He is a fourth generation Coloradan. His parents were educators and obtained doctoral degrees in education during Smith's early childhood years. Smith attended a desegregated school, bussing across the city from the first grade to go to a school with excellent resources. Smith's aptitude for STEM learning was evident in high school when he was first introduced to computers.

In his junior year of high school, Smith famously applied for an internship at Bell Labs and was, at first, denied. The problem was, the program was for junior and senior college students only. Smith was undaunted. He called the H.R. Director at Bell Labs every single day for two weeks. Then he cut back and just called every Monday for another five months. When an intern from M.I.T. didn't show up in June to start the internship, the H.R. Director finally called him back and Smith got the job. While interning at Bell Labs that summer, he developed a reliability test for operational amplifiers. This is a period of his life Smith called, "The Joy of Figuring Things Out," in his 2019 speech at the Morehouse College commencement ceremony. And Smith describes it as a formative experience which shaped his future career.

After earning a B.S. in Chemical Engineering at Cornell University he landed a job at Goodyear Tire and Rubber. He then worked as a chemical engineer at Kraft from 1986 to 1992. While at Kraft he earned two European patents. Robert eventually decided to go back to school to earn MBA. After getting his MBA from Columbia University, he was hired by Goldman Sachs. While at Goldman he advised on $50 billion worth of technology merger and acquisition deals. 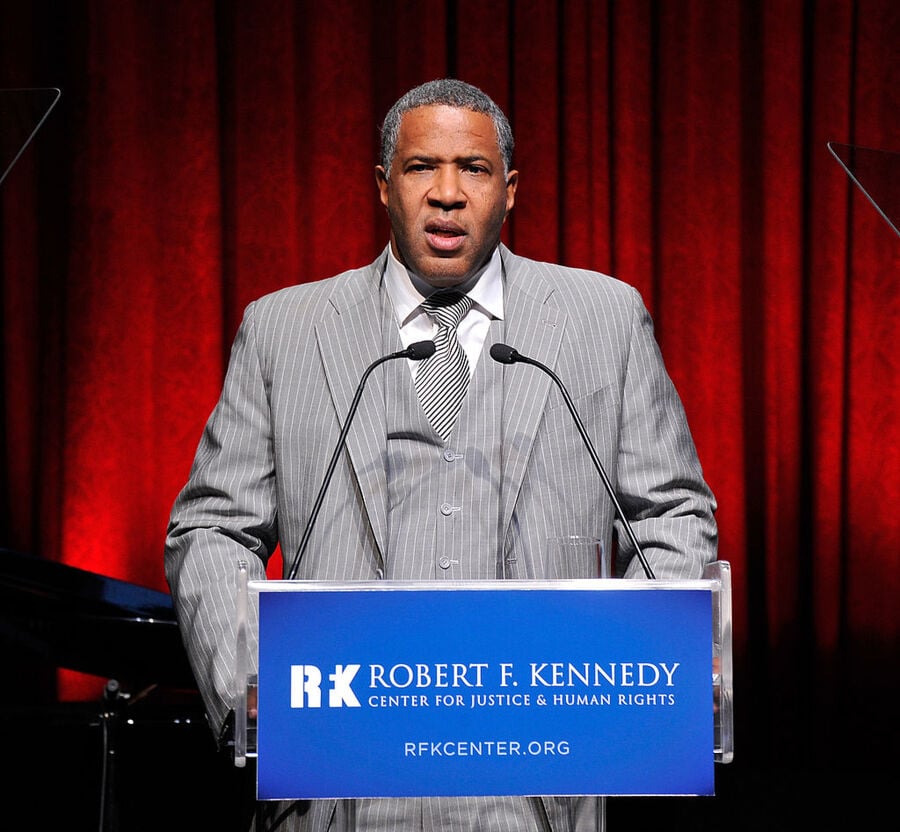 As we mentioned previously, Robert F. Smith founded Vista Equity Partners soon after leaving Goldman in 2000. The private equity/venture capital firm focuses on investing in technology and passive income software businesses. The company has offices in Austin, Texas, Chicago, New York, Oakland and San Francisco. As of this writing they manage more than $81 billion in assets and owns more than 50 software companies that employ 65,000 people worldwide. That employee count makes Vista the fourth largest enterprise software company in the world after SAP, Oracle, then Microsoft.

Vista's investment strategies cover private equity, permanent capital, credit and public equity. Vista looks to invest in companies ready to scale their software and platform services to a wider audience. And Vista works with their acquisitions by guiding sustainable growth as it backs their products.

Vista likes to buy software companies that dominate a unique niche of customers who pay for the software every month/year, forever. The beauty of these businesses is that, in most cases, the bones of the software are written just once. It is then maintained periodically with minor patches and upgrades but in the meantime those annual fees keep getting paid. A good example is fitness platform MINDBODY. MINDBODY is software that helps customers reserve classes and treatments at yoga studios, spas and gyms around the country. If you've ever checked into a class on an iPad at a yoga studio or gym, there's a very good chance you're using MINDBODY's software. The studio/gym/spa loves the software because it enables them to have professional services for a relatively minimal annual fee that they never stop paying. Vista acquired MINDBODY for $1.9 billion in December 2018.

In October 2020 Robert agreed to pay $140 million to settle a four-year tax crime investigation. Smith had been charged with evading taxes through the use of offshore accounts. As part of the settlement, the government agreed to drop charges but Robert had to agree to admit wrongdoing. The $140 million settlement covered back taxes, interest and penalties. Roughly 10 months before the settlement, federal prosecutors alleged that Robert avoided taxes on roughly $200 million worth of income that was moved from Vista to several offshore corporations. 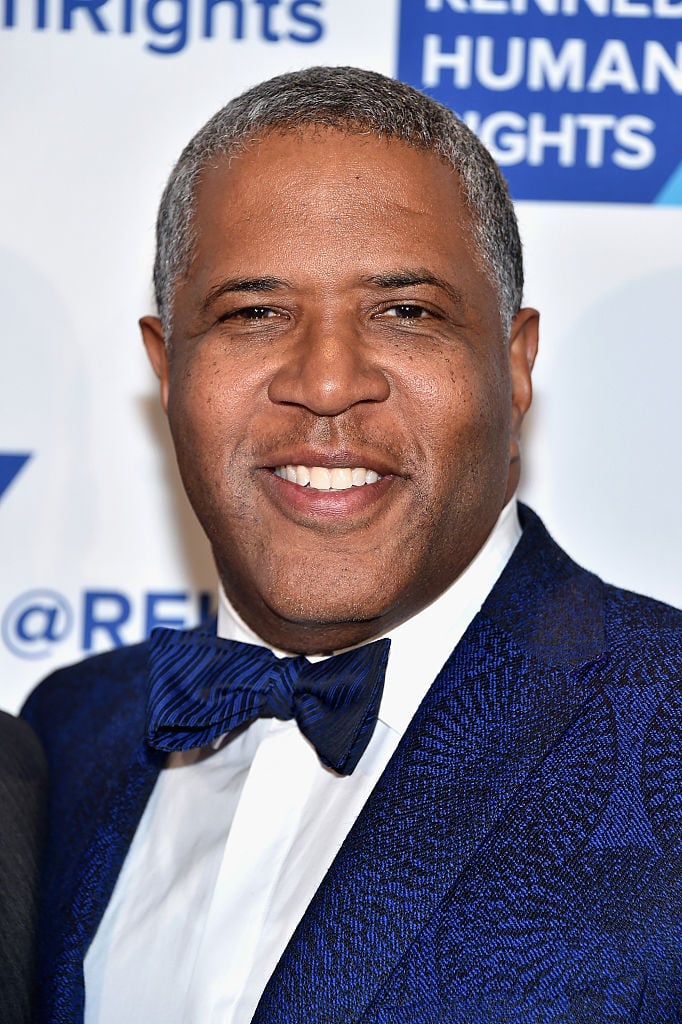 From 1988 to 2017 Robert was married to Suzanne McFayden. They share three children together.

Robert has been married to former Playboy model Hope Dworaczyk since 2015. At the wedding Hope wore a gown designed by Naeem Khan. She walked down the aisle into Smith's arms as John Legend sang, "For the First Time." The singer Seal also reportedly performed during the ceremony which was held at the Villa Cimbrone on Italy's posh Amalfi Coast.

Hope was the Playmate of the month April 2009 and Playmate of the year 2010. She and Robert have four children together. Today Hope is the founder and CEO of skincare company MUTHA.

In May 2017 Robert signed The Giving Pledge — the philanthropic movement led by Warren Buffett and Bill Gates, in which billionaires are encouraged to give away a majority (at least 50%) of their fortunes either during their lifetimes or upon their deaths. This pledge was not his  entry into philanthropy, but an opportunity to set a goal for himself and inspire others.

Smith's philanthropy is currently targeting educational equity, but his interests are broad. Founding director and President of Fund II Foundation, the nonprofit granting organization. The organization has fulfilled grants to fund initiatives in STEM and music education, African American history, health, internships and preserving access to green spaces and the outdoors. Smith has matched or added to donations via Fund II Foundation to provide grants for internX, Student Freedom Initiative, The Sphinx Organization and other worthy groups.

In May 2019, during his Morehouse College commencement speech, Robert F. Smith announced he would be paying off all student debt incurred by the class of 2019.

Most recently, Smith has been active with "One Stock. One Future." a financial literacy campaign powered by tech app Goalsetter to get kids and their families invested in saving and planning for a better future. Smith is the Chairman of Student Freedom Initiative, a single-purpose nonprofit program inspired by his Morehouse gift.

Smith racked up another first when he became the first African American to serve on the board of Carnegie Hall in 2016. Smith is on the board of Robert F. Kennedy Human Rights and is a Member of the Cornell Engineering College Council. Smith also serves on the Board of Overseers of Columbia Business School and is an at-large board member of the Business Roundtable. He donated $20 million to the National Museum of African American History and Culture. He gave $20 million to his alma mater, Cornell University, and added another $10 million for STEM scholarships for women and African American students. Smith has also donated millions of dollars to various causes ranging from the Prostate Cancer Foundation, the National Park Foundation to DonorsChoose and other causes.

Robert and Hope own homes in Los Angeles, Florida and New York City.

In 2018 they paid $18 million for a beachfront mansion in Malibu. Located on what is appropriately known as "Billionaires Beach", they listed this home for sale in November 2020 for $24.5 million. The sold the home in January 2021 for their exact offering price.

They own a second home in Malibu, which was bought in 2016 for $19.5 million from Real Housewives star Yolanda Hadid.

In 2018 they bought a New York City home – a condo in Chelsea, for a mind-numbing $59 million. The couple has since put the condo under massive renovations. 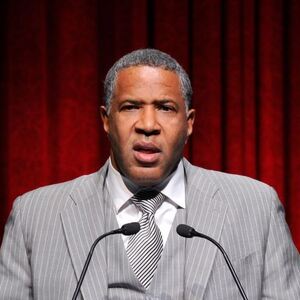