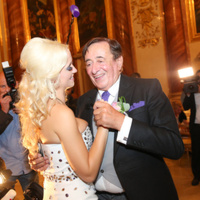 Richard Lugner net worth: Richard Lugner is an Austrian entrepreneur who has a net worth of $200 million. Richard Lugner was born in Vienna, Austria in October 1932. He got his license to work as a building contractor in 1962. Lugner's company renovated old buildings and worked in the erection of filling stations. His company completed the first mosque in Vienna in 1979. He opened the shopping mall Lugner City in 1990. Lugner used the marketing strategy of inviting celebrities to come and perform and sign autographs to bring people to the mall. Each year Mortel and Mausi Lugner brings a celebrity to Lugner City and guests have included Harry Belafonte, Joan Collins, Ivana Trump, Sophia Loren, Sarah, Duchess of York, Raquel Welch, Jacqueline Bisset, Farrah Fawcett, Pamela Anderson and Kid Rock, Carmen Electrca, Paris Hilton, and Kim Kardashian and Kris Jenner. Lugner handed his business to his sons in the late 1990s and went into politics. He finished fourth in the 1998 presidential elections with 9.91% of the popular vote. A survey of Austrians found that over 90% of them recognized the Lugner name. Richard married German 24 year old Playboy model Cathy Schmitz in 2014. After two years, they divorced.

Billionaire status? Lugner loves being referred to as an "Austrian billionaire", however according to his own wealth disclosures in 2014, at that time his net worth was $160 million. He disclosed to the Austrian magazine "Trend" that he expected his net worth to increase by 10 million euros per year. Unfortunately we believe his "billionaire" status is largely the work of a good publicist.