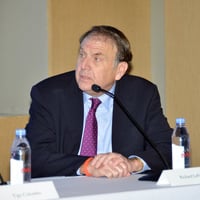 Richard LeFrak Net Worth: Richard LeFrak is an American billionaire who has a net worth of $5.8 billion. Born in 1945 in New York, New York, he serves as Chairman and CEO of LeFrak, a real estate development company that is held and run by the LeFrak family for over a century. Founded back in 1883 in France, by Richard LeFrak's great grandfather, Maurice, the company was taken over by Richard's grandfather, Harry, who began developing properties in 1901. It was Richard's father, Samuel, who expanded the company's operations further, turning it into one of the leaders in owning, developing and managing property in the U.S. A graduate of the Colombia University, Richard LeFrak joined the LeFrak Organization in 1968. Seven years later, he was appointed President, whereas he got elected Chairman and CEO after his father's death in 2003. Successfully managed by Richard too, the company has a real estate portfolio that includes major development projects in Battery Park City, LeFrak City in Queens, and Newport, Jersey City. Richard LeFrak is also active supporter of charities, presiding over the Richard S. and Karen LeFrak Charitable Foundation, whose mission includes giving support to various charitable organizations.