Reinold Geiger net worth: Reinold Geiger is a former ski champ and CEO of French cosmetics retailer L'Occitane who has a net worth of $1.3 billion. Geiger started his career in packaging before becoming a chief executive of L'Occitane in 1994. By then, he had already established and developed a company called AMS Packaging SA, which specialized in packaging for the high end perfumes and cosmetics market.

However, he decided to leave AMS Packaging entirely in 1990, when he started to invest in companies that were declining, such being the case with L'Occitane. But once he became L'Occitane's CEO, Geiger pushed the company to grow, especially in China and Japan, where its natural Provence-made creams and perfumes become increasingly popular. By 1996, Geiger held most of the L'Occitane's shares, having invested heavily in the company. Ever since, L'Occitane has transformed from a three-shop company to an international empire of 1,500 outlets. For his international development strategy of L'Occitane Group, Geiger was presented with an accolade of "INSEAD entrepreneur of the year'" in 1998. Geiger gained most of his knowledge, at the Swiss Federal Institute of Technology in Zürich, Switzerland, where he graduated with a degree in engineering in 1969 and then at INSEAD in Fontainebleu, France, where he gained a master degree in business administration in 1976. 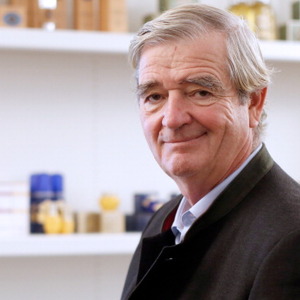